Robert Alfred Lygo volunteered for The Parachute Regiment and was posted to No 3 Platoon, A Company, 2nd Parachute Battalion.

Private Lygo saw action in Arnhem, where he was awarded the Military Medal.

During the Battle for the Bridge at Arnhem, Private Lygo was No.1 of a PIAT detachment attached to No.3 Platoon. This Platoon was holding a forward position, east of the Bridge, and was subjected to almost continuous enemy attack. On the 19th September three armoured cars approached close to the Platoon and started firing into the building. Private Lygo fired four bombs obtaining three direct hits and thus forcing them to withdraw. During this time the fire of the armoured cars was directed almost entirely against him. Soon after this two Mark III tanks approached and shelled the Platoon at very close range. Once again, though under heavy and direct fire, Private Lygo engaged the tanks and succeeded in burning out one and forcing the other to withdraw. Private Lygo's PIAT was the only Anti-Tank weapon in the vicinity and it was mainly due to his coolness and courage in the face of devastating fire that the Platoon was able to hold this house for so long. Throughout these engagements he was isolated from the remainder of the Platoon and was acting entirely on his own initiative. On the second occasion he deliberately exposed himself to heavy fire in order to work his weapon forward to a position where he could get a more accurate shot.

By Rebecca Blackburn with information supplied by the Pegasus Archive. 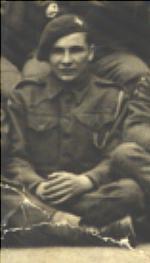