Robert Anthony Lycett, known as Tony, was born 1925 in Wiggington.

He was training as an engineer working on submarines before following his sister and two older brothers into the Army.

Private Lycett volunteered for The Parachute Regiment from the Royal Armoured Corps in 1944. He attended Parachute Training Course number 100 at RAF Ringway between 24 January and 5 February 1944. He passed the course despite fracturing his clavicle on landing.

Pte Lycett was posted to A Companry, 7th Parachute Battalion, and on 5 June parachuted into Normandy.

Pte Lycett recalls: ‘Our allotted role was to cover the left flank of the British sector, seize intact the bridge over the Canal de Caen and the River Orreat, capture Benouville and Ranville and seize and silence the important battery at Merville. Our aim was to delay German reinforcements coming from the east towards Caen and the newly formed bridgehead by destroying the bridge on the approach roads.

‘For the next few days we were under constant attack from infantry and tanks. After mad fighting, the lodgement area was rescued, forward positions established – and there we remained, facing the enemy for three long months. We were living in fox holes, through an exceptionally wet and cold summer until the break-out when we advanced some 50 miles to the Seine.’

Pte Lycett remained in Europe until September 1944, and in 1946 saw service in Palestine with the 3rd Parachute Battalion.

Lance Corporal Lycett was transferred into the A Release in the Reserves in 1947.

Tony married Irene, and was an active member of the 7th Parachute Battalion Reunion Association.

Tony Lycett died at home on 28 December 2013, and will be sadly missed.

On D Day in Normandy I took part in the first full scale British Airborne Divisional Operation. Our D.Z. (Drop Zone) was near the village of Ranville. 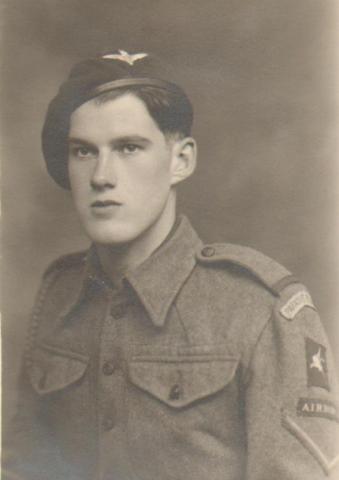