Robert Herbert McCombe, son of George and Emily McCombe, was born on 6 March 1923. He moved with his family to White Abbey, Co. Antrim, Northern Ireland, in 1926. He enlisted into the Royal Inniskilling Fusiliers in Belfast.

Private McCombe volunteered for The Parachute Regiment in 1943 from the Royal Armoured Corps (RAC), and attended Parachute Training Course number 77 at RAF Ringway. The course ran between 9 and 18 August 1943, and his instructor noted that he ‘Progressed well to become a good man at stick jumping.'

After a period at No1 Airborne Forces Holding Unit he was posted to the 12th (Yorkshire) Parachute Battalion.

Pte McCombe Jumped into Normandy on Operation Overlord, where The 12th Battalion captured Ranville despite its scattered drop on D-Day 6th June 1944 and held it against repeated German counter-attacks as well as relieving the glider borne elements at Pegasus Bridge. It fought around Breville and formed part of the break-out to the Seine with the 6th Airborne Division in August.

Lance Corporal McCombe was promoted in the field.

On 19 August L/Cpl ‘Bertie’ McCombe was killed aged 21, during the Battle of Putot En Auge. He is now buried in Putot-En-Auge Churchyard. 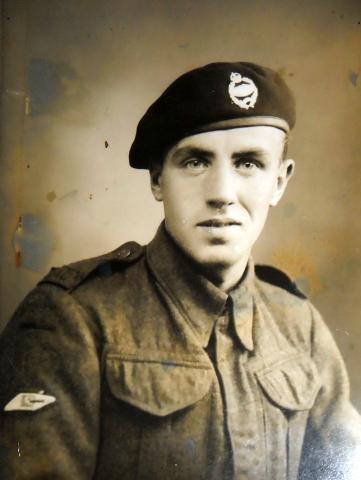