Robert Hugh 'Loopy' Levien was born in 1917 of Jewish descent.

Although 'Loopy' was commissioned into The Lancashire Fusiliers on 26 August 1937 it appears he had surrendered his commission, and was serving as a Sergeant in The Royal West Kent Regiment, at the formation of the 1st Parachute Brigade.

He attended the brigade's first parachute training course held at RAF Ringway between 3 and 15 November 1941, as part of C Company 2nd Parachute Battalion.

'Loopy' returned to RAF Ringway for the second advanced course of parachuting in January 1942. Unfortunately he fractured his ankle on a balloon jump which put him out of action for two months and as a consequence he missed the Bruneval Raid in February 1942.

He served in the battalion's ranks during the North African campaign and was granted an emergency commission as a 2nd Lt in April 1943, after the battalion had suffered heavy losses.

Immediately distiinguishable by his trademark handlebar moustache, 'Loopy' went onto serve with the battalion in Sicily, Italy and Arnhem, where he commanded No 4 Platoon, B Company. He was eventually captured and held as a Prisoner of War.

After repatriation, he continued to serve in The Parachute Regiment until transfer to the Territorial Army in August 1948. He initially served with The Cheshire Regiment and later transferred to The Royal Fusiliers. 'Loopy' had risen to Major by the time he was transferred to the TA's Officer Reserve in 1962.

For further reading about his activities at Arnhem see:
'B Company Arrived' by David G van Buggenham, RN Sigmond Publishing 2003. 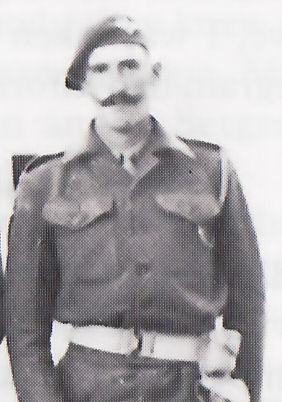