Robert Ferguson Watson, known as Jock, tried to escape the reserved occupation of engineering by volunteering for the RAF but was rejected. He again volunteered, this time for the Army at Acton in West London, and was sent to the Royal Tank Regiment (RTR), first to Bovington and then on to Hull. While at Hull he again volunteered, this time for the Airborne Forces and the Parachute Regiment. However, his short time in the RTR meant that the army sent him to the 6th Airborne Armoured Reconnaissance Regiment instead. On arriving in Salisbury from Hull, he got horribly lost looking for his barracks in Bulford, nearly putting him AWOL (absent without leave).

Going through training in 1943 he was glider trained on Horsas, and on the evening of D Day on the 6 June 1944 found himself tasked with operating the ‘det cord’ on the rear of his Horsa to release his Jeep – he’d left Brize Norton only an hour or two earlier. Destined for Landing Zone N, north of Ranville, he recalls the original objective as the Troan Road, and being briefed on 21 Pz Recce, who it was expected they’d meet.

He recalls the shelling and in particular air burst rockets in the tree tops.

Jock remembers being in Normandy for around 8 weeks, but he must have been home by the second week in September - as he got married on 16 September – while his colleagues in 1st Airborne Division were bombing up for Operation Market Garden.

He missed his first Christmas leave with his new wife as the 6th Airborne was moved to the Ardennes to help repel the German offensive in the Battle of the Bulge in December 1944.

Private Watson spent the majority of time in Bren gun carriers and it was while he was a in a carrier in the snowy Ardennes that he was wounded while driving when the carrier went over a mine. As a Vickers machine gunner, his regular place was behind the gun in the middle/rear of the carrier. But he was driving when the tracks hit a mine and the regular driver was thrown from the vehicle and very seriously injured. After two weeks Private Watson was released from the field hospital with a bandaged leg and no transport, he had to walk or cadge a lift to the Regiment – after a couple of days finding out where it was!

His next operation involved crossing the Rhine in his carrier over one of the large Bailey bridges, then racing to meet up with the rest of the Regiment at their drop zone at Hammilkeln for Operation Varsity.

Back in his carrier, Private Watson crossed the river and then took part in the race to the Baltic, meeting up with the Russians in early May 1945. Jock recalls the Regiment’s large columns: Motorcycles, jeeps, Dingo’s, Bren carriers and in Jock’s opinion their ‘good’ Cromwell Tanks – however he also notes that they had a couple of Shermans (probably Fireflys) which had to be painted up before they met with the Russians. With 6th Airborne at the Baltic and 1st Airborne in Norway, Corporal Watson was sent to Palestine and the Security duties of an Airborne division now at ‘Peace’.

Sergeant Watson spent his time constructing things and learning to swim - having crossed the Channel by Horsa, the North Sea by Liberty Ship and the Rhine by Barley Bridge, he’d not been a swimmer until he went to Palestine!

Despite driving all manner of wheeled and tracked military vehicles Jock never passed a civilian driving test - his army driving certificate he filled out himself – and was driving until he was 89.

Jock lives in retirement, his much loved wife having passed away, in a home by the sea in West Sussex, where he gives the staff hell. 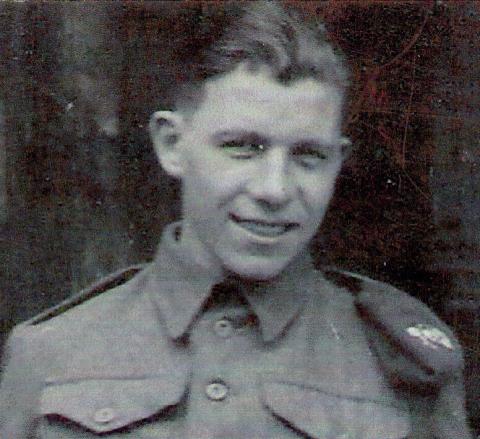