Corporal Robert Francis Edward Evans was the son of Evan John and Mary Ann Evans, and husband of Barbara Joan Evans, of South Norwood, Surrey. He served with 9th Field Company (Airborne) Royal Engineers and took part in the Battle of Arnhem, during Op Market Garden.

Corporal Evans took his place along with the whole Company which emplaned at 1020 hrs on the morning of 17 September 1944 at RAF Keevil. The Coy was assigned a total of sixteen gliders (Chalk Nos. 381-396, including the ill-fated No.389 which crashed at Double Hills), piloted by members of the D Squadron, Glider Pilot Regiment, and towed by the Short Stirlings of 299 Squadron, 38 Group RAF. At 13:40 hrs, the gliders of the Company landed on LZ ‘Z’ between Wolfheze and Heelsum about eight kilometres west of Arnhem. Within thirty-five minutes the Company had reached the Rendevous Point (RZ) at the South corner of the landing zone.

Later, Corporal Robert 'Taffy' Evans was part of the small number of men from 2 Platoon, 9th Field Coy who made it through to the Bridge at Arnhem on the 17th September, where they fought under very poor conditions without much food, water and very little ammunition until the early hours of Thursday 21 September when the position was finally overrun and the remaining defenders dead or taken prisoner.

Corporal Evans died on 25 September 1944 of wounds sustained during the Battle at the Bridge, aged 26 years old. He was originally given a Field Burial in Arnhem General Cemetery before being reinterred at Oosterbeek War Cemetery, Arnhem.

In 1994, former Sapper Tom Carpenter was one of the British initiators for a Bronze plaque in St. Eusebiuskerk in memory of the six Sappers from 2 Platoon, 9th Airborne Field Company, Royal Engineers, who were killed in the Battle around the Rhine Bridge in September 1944. The names of two other soldiers who died of their wounds as POWs in Germany were also included on the plaque. A number of Dutch acquaintances joined the British in forming the Comité Royal (Corps) Engineers Monument led by Mr Jan H Boon BSc. Burgomaster Paul Scholten personally supervised the placing of the plaque inside St. Eusebiuskerk on the left side of the main entrance to the church.

On 14 September 1994 a Bronze plaque bearing the Pegasus emblem and Royal Engineers badge was unveiled by Colonel (Retd) B O’Callaghan, who commanded 2 Platoon, 9th Airborne Field Company, Royal Engineers. Corporal 'Taffy' Evans was amongst those commemorated. 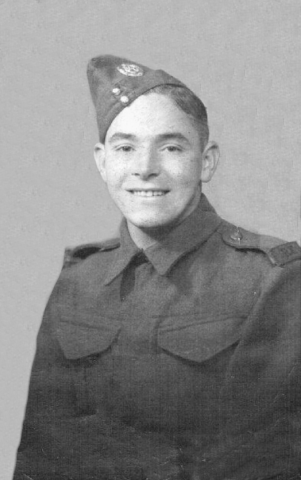