Lt. de Lautour commanded one of the first drops by the the 22nd Independent Parachute Company on 5th June into DZ 'V'. His 'stick' included nine other parachutists (one of whom was L/Cpl Edward Glenn, who was Killed In Action on 7 June 1944).  He emplaned onboard a Albemarle of 295 Squadron at RAF Harwell at 23:30 on 5 June 1944. The stick was tasked with 'marking' the drop zone for the 1st Canadian and 9th Parachute Battalions at DZ "V", but all the radar and visual beacons were either lost or damaged. Nevertheless, they were successfully able to join up with Lieutenant-Colonel Terence Otway’s 9th Battalion, prior to the assault on the Merville Battery.

Acting Captain de Lautour died on 20 June 1944 aged 27 years old, from wounds sustained earlier in the Normandy conflict. He was awarded a posthumous Mention in Despatches on 22 March 1945, for actions in Normandy. He is now buried at Ranville War Cemetery, Normandy. 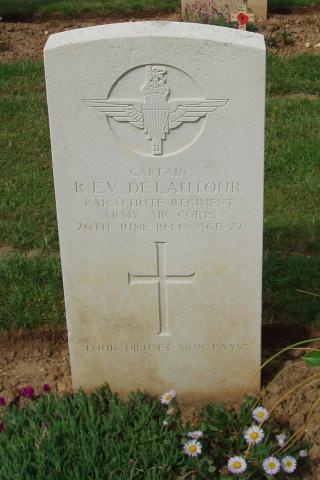