Robert Dennis Page, son of Robert and Gladys Page from Northampton, enlisted into The Northamptonshire Regiment during the Second World War and volunteered for airborne forces in 1942.

He transferred to the Airborne Forces Depot at Hardwick Hall and began preparatory ground training under RAF instructors on Monday 26 October for Course 36. Having completed the ground training satisfactorily, the course cadre, comprising 202 personnel, moved into camp at RAF Ringway, Manchester, on Thursday 5 November to begin parachute training. The course of seven jumps was completed on 12 November 1942.

Pte Page joined B Company, 2nd Parachute Battalion as a reinforcement in January 1943 in North Africa, despite being torpedoed en route.

At 07.00 hours on 27 March 1943 the battalion had moved to an assembly point west of Djebel Abiod  and was given orders later that day for its part in a night attack by the 1st Parachute Brigade towards Sedjenane (Sejenane).

The attack was difficult, requiring an uphill advance through a minefield with trip wires. B Coy crossed the start line at 23.00 hours following a heavy artillery bombardment of enemy positions and was led by Lt 'Dicky' Dover's platoon.

Shortly after midnight Lt Dover's platoon sergeant triggered a trip wire and an explosion amongst the leading section, causing seven casualties. As a result of the explosion it is believed that Sgt Lenderyou, Cpl Thomas Gay, Pte Barry Arliss, Pte Rod MacDonald were killed outright with Lt Dover and Pte Page wounded.

Sadly, Pte Page died of his wounds although Lt ‘Dicky’ Dover recovered and went on to fight at Arnhem where he was wounded again.. 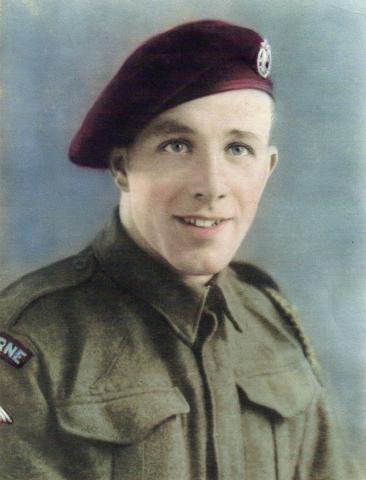