Dicky Spender was a talented, larger than life figure who was killed aged 21 while charging German positions in Tunisia during Operation Torch in 1943. His loss was keenly felt by men and officers of the 2nd Parachute Battalion. Victor Dover, a fellow officer in the battalion, recorded many years later: “His death left a gap of friendship which was never filled. A character who was so much more colourful than fiction.” His friends saw him as a kind, sensitive, energetic and happy person. These positive qualities endured even during the intense fighting and hardships of Operation Torch. One soldier who served under him commented: “He was different from any other officer I served with…. a real character and a brave man.”

The youngest of four children and born in 1921, he was educated at King Edward VI School, Stratford from 1930 to 1940 where he was Captain of School. One of the School’s Houses is named after him.

Spender was an accomplished sportsman: a keen oarsman who loved rowing on the Avon, a good boxer and a better than average rugby forward according to his contemporaries. In addition he was a musician and a published poet held in high regard. He was once referred to in the Daily Telegraph as the Rupert Brooke of the Second World War and his poems were published by Sidgwick and Jackson in 3 books:

Dicky Spender was already a published poet held in high regard when, as a platoon commander in C Company of 2 Para Bn, he was killed assaulting German positions in Tunisia at the age of 21.

Dicky Spender was a talented, larger than life figure who was killed aged 21 while charging German positions in Tunisia during Operation Torch in 1943. 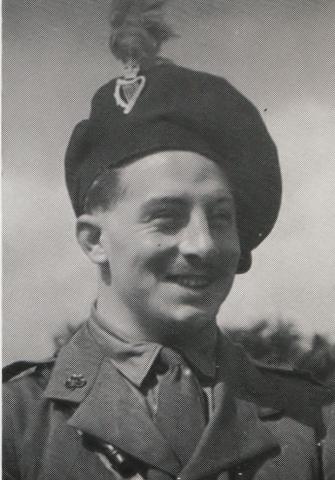