Richard Hall qualified as a military parachutist on Course 179 which ran at RAF Ringway from 4 to 28 September 1945 and was initially posted to the Holding Battalion.

He was deployed to Palestine in March 1946 and service records suggest he joined the 6th (Royal Welch) Parachute Battalion, which later merged with the 4th Battalion.

Richard returned to the UK in 1947 but moved out with 4/6th Battalion to Germany in February 1948.

Richard deployed with the Worcesters for the Malayan Emergency, serving mostly as Platoon Sergeant and sometimes as Platoon Commander on operations. In August 1951, he was commanding a patrol in the Kuala Selangor District which contacted the enemy. The Worcester Regiment history records that:

"In August the successes continued. On the morning of the 4th, 6 Platoon “B” Company (Serjeant Hall) contacted two terrorists in a swamp; Serjeant Hall killed one and the other escaped. Very shortly afterwards the Platoon Iban tracker reported large numbers of terrorists ahead, and that they were placing their hats on sticks, probably as a decoy. The enemy opened fire. The Platoon tried to work round to a flank, but in doing so ran into more of the enemy, two of whom were wounded. They then tried the other flank, at the same time using their grenade-firing rifle to drop grenades into the terrorist position. They had almost got to the rear of the position when the terrorists withdrew hurriedly. Two more of the enemy were wounded. 6 Platoon had been outnumbered by two to one. On the following day, whilst still pursuing the terrorists, two of the enemy were contacted and one killed. About a week later the companion of the terrorist, shot by Serjeant Hall, surrendered to the Police."

Richard was later awarded a Mention in Despatches for his actions on the patrol.

He subsequently served as an instructor at The Depot of The South Staffordshire Regiment before returning to civilian life in December 1952.

By ParaData Editor based on service records kindly supplied by Mike Hall. 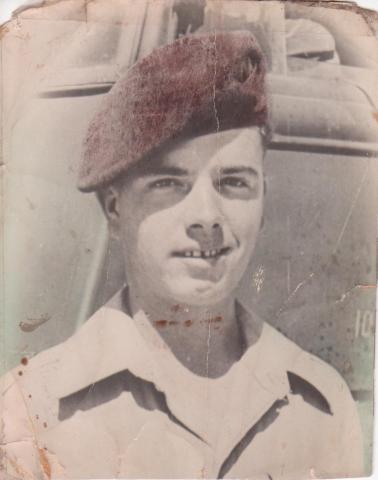