He served with 1DERR in Malta, BAOR (Minden), Catterick, Berlin and completed two tours in Northern Ireland.  Richard was then posted as G3/Forward Air Control with HQ 44 Para Bde (V) at Duke of Yorks HQ London.  He left the Regular Army in September 1973 and was granted a Type A Commission PARA with effect from the same date. 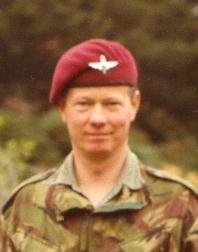