Dick Hargreaves served as Adjutant and a Company Commander in the 4th Parachute Battalion during World War II. He was awarded a Military Cross for leading an attack on German forces holding Laterza Bridge in Italy,1943.

He enlisted into the Territorial Army with the Royal Fusiliers and had been promoted to Lance Sergeant by the time he was commissioned in December 1939.

Dick later volunteered for The Parachute Regiment and qualified as a military parachutist on course 17, which ran at RAF Ringway in July 1942. He initially served as Adjutant, and Captain, under Lieutenant Colonel J A Dene in the 4th Parachute Battalion at Bulford.

Shortly after landing in Italy, Dick, who was by now commander of B Company, was tasked to lead an assault on German positions and the citation for his Military Cross records:

‘On the night of the 15/16th September 1943 Major Hargreaves commanded a company assault on the Laterza Bridge. The attack involved a night approach march over difficult country followed by an assault on strongly defended prepared positions of the Germans. The attack led by Major Hargreaves with great bravery and dash was thrust home despite heavy mortar and MG [machine-gun] fire. The enemy suffered considerable casualties and several MGs and a gun were destroyed. Later the Company was ordered to withdraw, which manoeuvre was skilfully completed with small loss to the coy, through mortar and MG fire. At all times Major Hargreaves disregard of his own safety, his leadership and control was an inspiration to the Company.’

The battalion continued in action in Italy until May 1944, when it was withdrawn to Salerno for rest and recuperation. By July the men had moved to Rome to practice for its next airborne assault.

Dick jumped into combat in southern France in August 1944, for Operation Dragoon and later deployed with the battalion, and the rest of the 2nd Parachute Brigade, into Greece initially to harass the German withdrawal. However, vicious riots and battles broke out between rival Greek factions in Athens. The brigade became involved in intense street fighting in Athens against Greek rebels shortly before Dick’s departure for the Haifa Staff College.

He was then posted as Brigade Major for 10th Infantry Brigade, 4th British Division, after completing his course and was eventually demobilised in 1946.

After the war a successful business career followed, which included appointments as a main board director of the Savoy Hotel Group and later chairman of the West Country brewers, JA Devenish. He also served as a City of Westminster Councillor for four years, Deputy Lord Mayor in 1977, and chairman of the Joseph Weld Hospice for twelve years.

Dick Hargreaves was made a Chevalier of the Legion d’Honneur in 2005, in recognition of his role in helping to liberate southern France in August 1944.

Compiled with the assistance of David Mallam and Dick Hargreaves

Dick Hargreaves joined the Territorial Army in May 1939 as a Fusilier in the 12th Battalion Royal Fusiliers, whilst working as a receptionist at the Berkeley Hotel, London, having served 20 months 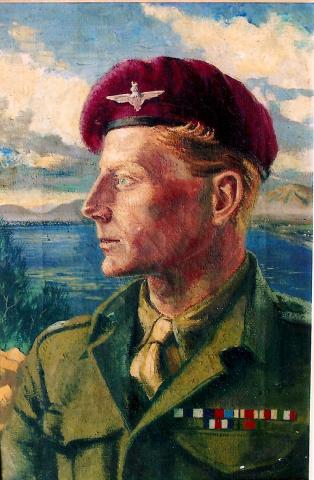 Pietro De Tommaso said:
Major Dick Hargreaves at Laterza Bridge in the 2013.
Thank's for all Soldier.