Richard Andrew Palethorpe Todd was born in Ireland in 1919. His father, Andrew, was a doctor and had been awarded 3 caps playing rugby for Ireland. The family moved to India for a few years, before returning to Ireland when Richard was 3 years old. At the age of 7 the family moved to England and Richard attended Norwood Prep School in Exeter and then Shrewsbury School.

After completing his education Richard at first sought a career in the military before deciding on an acting career. To this end, Richard attended the Italia Conti Academy of Theatre Arts. He appeared in a small number of films between 1937 and 1939.

When war was declared, Richard was appearing at Dundee Repertory Theatre, which he had co-founded, but bluffed his way through St Andrews University reception Unit and was accepted as a Potential Officer.

Training at Sandhurst, Richard was injured along with 25 other cadets when the college he was in was bombed. He remembered the aftermath of the bombing in which 5 were killed in an interview with the Sunday Times in 2000:

"I clambered back into the darkness over the debris, searching for casualties. Torch lights were approaching. The first person to reach me shone his light on me and was promptly sick. What I had thought to be warm water was in fact blood running from a mass of puncture wounds and abrasions all over my face and body. No 'Hammer Horror' film ever showed a more gory monster".

After commissioning in 1941, Richard had another scrape with death when he failed to get a seat at Cafe Paris in London, which was bombed that evening, killing 15 officers. Richard recalled "Already I was getting good at dodging the old reaper".

Richard served with The Kings Own Yorkshire Light Infantry, before volunteering for airborne forces and joining the 7th (Light Infantry) Parachute Battalion in October 1943.  He completed Parachute Course 89 in Oct/Nov 1943 and his report states: "Jumps well, cheerful, fine example to his men". He remembered his parachute training: 'I soon learnt not to peer down...from a wallowing balloon. It is not easy to retain a sense of inviolability when the blood has drained from your brain and your hands are drenched in sweat'.

For D-Day, Richard was in HQ Coy and would act as assistant Adjutant, however, he was also told to be prepared to take over Mortars or Signals platoon if required. In the briefing for the operation, Richard thought it "strangely reminiscent of the readthrough and cast list for a new production."

The battalions role was to relieve the glider troops of the coup de main party from the airlanding Ox and Bucks. They held a service just prior to leaving, conducted by the Rev Parry. Richard recalled:

"A more unlikely or piratical congregation could not be imagined, every man a-bristle with weapons, his face and hands besmirched with black cream, his helmet on the ground before him, his rifle or Sten laid across it. 'Onward Christian Soldiers' went well. 'Abide with Me' was rather more ragged."

Boarding the 'Stirling' that would take them to Normandy, Richard was at the front and carried a pack of mattocks and shovels and a dinghy. Richard noted that "Only eyes, teeth and bare metal glinted in the dim light". Jumping at approximately 12:40, Richard recalled "I thumped onto a cornfield in Normandy, an illegal immigrant without a passport but nevertheless welcome, I hoped". According to Richard they should have been aircraft 31, but the pilot declared he was the senior officer flying and would therefore, be No 1! "Gawd!" thought Richard "I'm going to be the first man on the ground".

Slowly the battalion regrouped at the RV and set off for the bridges at 01:30 with only 150 men. On the approach all was quiet, and Richard saw his first German - "the first body I saw was the legless corpse of a German Officer by the remains of his staff car. It was a horrible sight and I should have been revolted, but I just felt curious and thought 'poor sod'". Then there was a cacophony of fire and the men ran to cover. Reaching the Cafe Gondree, Lt Col Pine Coffin ordered Richard to set up an HQ at the hamlet of Le Port. Intense fighting followed and Richard took part in an action when 2 boats approached up the canal. These were riddled by fire and the Germans captured.  Richard noted that "to add to our battle honours that day we were able to claim a naval victory".

By the evening of the 6 June, reinforcements arrived and the battalion met up at the Cafe Gondree, with the owner Georges and his daughters waving as they marched past.

Richard fought through Normandy and stayed with the battalion for the rest of the war as Motor transport Officer, and spent his final year in the military in Palestine. It was here he had his final incident, by somersaulting a Jeep and suffering a broken shoulder and a head injury. However, Richard discharged himself: "A hatred of hospitals bedpans had me rapidly on my feet after being unconscious for 2 days".

On returning to the UK in 1946, Richard recalled: "On my first morning as a civilian I sat in my London hotel room (still in my uniform because I did'nt fancy the suit, coat, hat and shoes that had been issued to me in Aldershot and telephoned my former agent". From that call Richard returned to the theatre in Dundee, met his first wife and started a glittering movie career. However, Richard himself stated "I had not intended to return to theatre work or acting of any kind. I had become rather khaki minded during my war service and never divulged to anyone that I had been an actor". Starring in films such as 'The Dambusters'(1955), Richard later went on to play John Howard in the film "The Longest Day"(1962), recreating the battle around the bridges in Normandy. Here he recalled: "I didn't feel like a 40 year old actor; I was right back to being a 25 year old".

Richard maintained a link with Normandy and the Cafe Gondree, even donating the webbing he wore on D-Day to the cafe for display. He was also a keen supporter of The Parachute Regiment and Airborne Forces Museum.

After a 50 year acting career, Richard Todd died on 3 December 2009. The route to St Wulfram's Church, Grantham for a memorial service held on 10 May 2010, was lined by veterans, with PRA standards in abundance outside the church.

Compiled with archive material and extracts from the Times and Sunday Times. 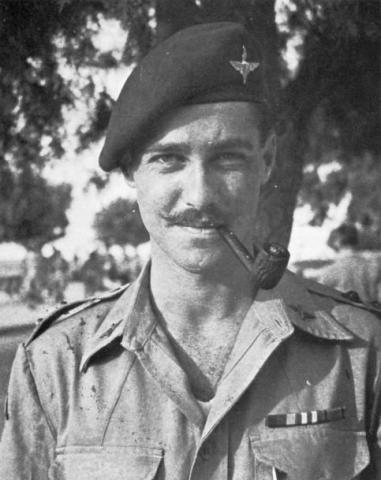