Richard Banks, known as "Admiral" Dickie Banks, was born in 1919 in Ilford. He was the son of Jeremiah Thomas Banks and Martha Banks. With Sergeant Hebblethwaite, he carried engineers of the 3rd Parachute Squadron to DZ-K with the First Lift on the 6 June 1944 into Normandy. He was awarded the Distinguished Flying Medal, confirmed in the London Gazette in 19 October the same year. His citation reads:

'At 2250 hours on the 5th June, 1944, Staff-Sergeant Banks took off on tow with five other gliders from his aerodrome loaded with engineer stores and personnel for the purpose of blowing certain bridges at and near Troarn, east of Caen. Parachutists were to have cleared a landing zone near Touffreville (10 miles inland) and to have laid out landing lights. On crossing the French coast the glider combinations flew into cloud necessitating instrument flying to keep in the proper tow position. On coming out of cloud only one set of lights was visible, belonging to another strip. All pilots except an officer (piloting another glider) and Staff-Sergeant Banks mistook this for the landing zone. The proper landing zone had not been prepared, there were no lights and no direct moonlight. Nevertheless, Staff-Sergeant Banks identified it, pulled off and made a successful landing in spite of the poles set up to prevent landings. He successfully unloaded his glider while British paratroops were engaging the enemy about 200 yards away.

Owing to the calmness, efficiency and courage of Staff-Sergeant Banks (together with the above mentioned officer) in making landings in extremely difficult circumstances, the bridges were blown and the operation was a complete success.'

Staff-Sergeant Banks and his co-pilot Sergeant Hebblethwaite participated in the Battle of Arnhem, flying a Horsa glider, chalk number 190, to LZ "S" on the 17th September 1944, carrying men of the 1st Battalion The Border Regiment. They were towed from RAF Blakehill Farm by a Dakota flown by Pilot Officer G. P. Bailey of 233 Squadron. The glider made a successful landing and the men inside moved off to their rendezvous point. 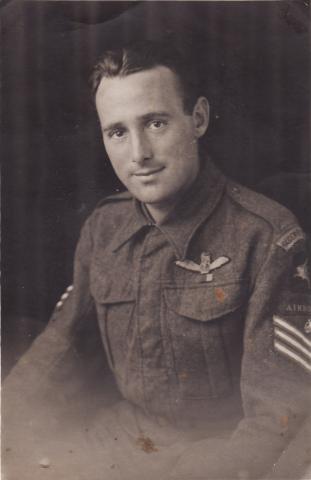