His first job was Senior Modern Language Master at Dover College before becoming a deacon at Canterbury Cathedral. He was ordained on 18 December 1938 by the Archbishop of Canterbury – Cosmo Gordon Lang.

Reverend Ogilvy continued to teach at Dover College and was the Assistant Chaplain to the College. The students affectionately nicknamed him ‘Watto’ due to his initials. He became the chaplain in 1938.

Rev Ogilvy was granted an emergency commission in the Royal Army Chaplains’ Department in February 1940. He served in Tidwoth and Northern Ireland before in 1941 flying to the Middle East to join the 32nd Armoured Tank Brigade. He served in Toburk, Palestine and Alexandria before being listed as missing at Cyrenaica in June 1942.

The following month he was reported as a Prisoner of War in Camp 75 at Bari, Italy, he became very unwell with diphtheria.

In April 1943, without any prior notice, he turned up on his sister Mary’s doorstep, having been repatriated. He was very unwell and ‘supported by two six foot squaddies’. He was sent to Horton Emergency Hospital and while he recuperated, he acted as the hospital Chaplain.

Once he had recovered, he must have reached a high standard of fitness because he volunteered for airborne forces and attended parachute training course number 117 between 21 May and 8 June 1944.

He was posted to HQ 6th Airborne Division in Normandy on Operation Overlord. The Reverend Captain ‘Tully’ Ogilvy was posted to The 8th (Midland) Parachute Battalion and went with them to The Ardennes and then Operation Varsity on 24 March 1945.

Although wearing a Red Cross Arm band whilst he helped the wounded, (all military chaplains are categorised as under the terms of the Geneva Convention as ‘Ambulance personnel’ and therefore should wear a Red Cross Armband on active service. Each chaplain is issued a Red Cross armband with a unique serial number), The Rev Capt Ogilvy was shot by a sniper and died of his wounds on 25 March 1945 aged 33. He is now buried Reichswald Forest War Cemetery.

By Wendy George with information from his nephew Tully Potter and David Blake form Museum of Army Chaplaincy. 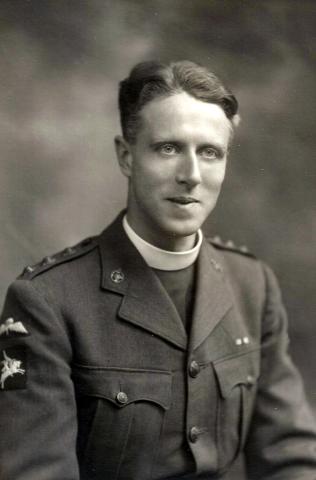 Tulliedeph Potter said:
Remembering my Uncle Tully, 75 years after his death. Also remembering those who died with him on Operation Varsity. Tully Potter
Add your comment