Edward Phillips was born in India in 1912 to Congregationalist Ministers. He was sent to school in England at the age of 6, and attended Eltham College where he was a keen and accomplished rugby player. He later attended Oxford University and Wycliffe Hall theological college.

Captain (Capt) The Reverend (Rev) Edward Leigh Phillips was granted an emergency commission in the Royal Army Chaplains’ Department in January 1941 and volunteered for airborne forces.

He was the 10th Parachute Battalion’s Padre and served with them in Italy in 1943.

Capt The Rev 'Bill' Phillips then served as Padre to the 3rd Parachute Battalion and deployed with 3rd Para Bn to Arnhem, as part of 1st Airborne Division's airborne assault to capture the Rhine crossings at Arnhem during Operation Market Garden in 1944

On Sunday 17 September 1944 he jumped onto Drop Zone X with 3rd Para Bn, whose progress into Arnhem was slowed due to unexpectedly stiff resistance by German forces right from the start.

That evening Padre Phillips tended the wounded at the J P Heijestichting School. The next day (Monday 18 September) he managed to get to St Elizabeth’s Hospital in Arnhem, where he tended wounded British and German troops.

The hospital fell into German hands and Padre Phillips was held as a prisoner of war. He was later taken to Oflag 79, where he remained until the camp was liberated in 1945.

He was placed on the Army Reserves List in July 1946 and went on to become the Deacon of Lewes, Sussex.

After his retirement in 1978, he took up golf with his wife Nancy.

He celebrated his 100th birthday in 2012 and credits his long life to staying active. 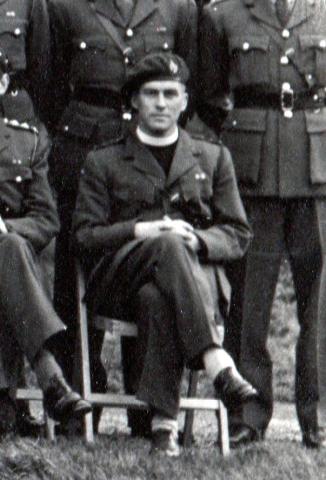