The Rev Bernard Joseph Benson, son of Henry and Bridget Benson, of Shipley, Yorkshire. He trained to become a member of the Roman Catholic Society of Jesuits, before embarking on service with the with the Royal Army Chaplain's Department, gaining his commission on 17 October 1941.

In September 1944, The Rev Benson was serving with Airborne Forces, under Divisional Headquarters, attached the Medical HQ. He took part in the Battle of Arnhem, during Op Market Garden. Padre Benson was seriously wounded whilst on duty at the Hospital when it was shelled by German forces, his arm was almost severed and was amputated.

The Rev Benson died of wounds on 27 September 1944, aged 30 years old. He is now buried at Oosterbeek War Cemetery, Arnhem.

With assistance from Matthew Gibbs 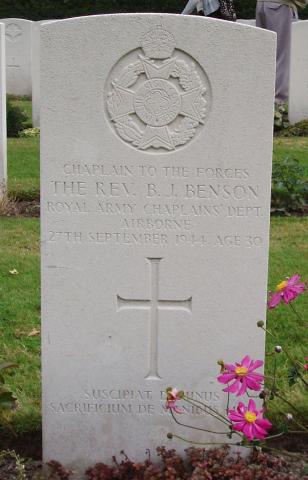