The Rev Bernard Egan was a Roman Catholic priest who volunteered to be a Chaplain to the forces soon after the outbreak of the war in September 1939. When the appeal for additional volunteers to form two more ‘Special Air Service’ Battalions was sent out in September 1941, he answered the call and later claimed two Airborne firsts.

The Rev Egan was the first Chaplain to obtain wings and also the first Roman Catholic Chaplain to do so. In fact he attended Parachute Course 5 at RAF Ringway in December 1941, although he did not pass out until 3 January 1942. He was accompanied on this course by another padre, the Reverend R Talbot-Watkins. He later claimed that although they passed out on the same course, E came before T-W - so he was the first!

When asked about the point of undertaking the rigorous training, he replied that he considered it important to set an example to the men with whom he would be going into combat, and he had no right to judge them or to discuss their dangerous duties if he had not emptied the same cup to the last drop. While Rev Talbot-Watkins was posted to 1st Parachute Battalion, Bernard Egan went to 2nd Parachute Battalion, where he remained for several years. He served with the Battalion in North Africa, Sicily, Italy and Arnhem. Bernard received a Military Cross for his actions at the Primosole Bridge in Sicily during July 1943.

At Arnhem in September 1944, he made it to the Road Bridge with most of the 2nd Battalion, and spent a fair amount of time in the Regimental Aid Post (RAP) with the Regimental Medical Officer (RMO) Captain J Logan. On the evening of Tuesday 19 September, whilst returning from a visit to wounded soldiers in other buildings, he was seriously wounded in the back and legs and joined the other wounded in the basement 2nd Battalion RAP.

Taken prisoner when the Bridge area was finally overrun, he eventually ended up in a Prisoner of War camp Hospital in a bed next to his CO, Lt Col Johnny Frost at Obermaasfeldt in Germany. He and Frost had already undergone one operation in the Arnhem area and had to go through another one here. As Frost later commented:

‘After our second operation and with the absence of modern drugs, these had to be swabbed out twice daily. A painful business and I so well remember our argument as to whether it was best for the orderly giving the treatment to come to us at the beginning or the end of his round. I wanted to get it over as quickly as possible but he [The Rev Egan] felt that, hearing others suffering first, strengthened him to bear the pain too.’

Liberated in 1945, The Rev Egan left the services due to his injuries and returned to teaching. For 20 years was the Headmaster of Wimbledon College Preparatory School in London.

Around 1978 however, his wounds began to give him trouble and he started to lose control of his legs. His condition gradually worsened and for the last few years of his life, he could no longer walk. Rev Egan died in July 1988, aged 83 years old. His medals were donated to the Airborne Forces Museum, and are now displayed at the renamed Airborne Assault Museum, Duxford.

With assistance from Niall Cherry, and Matthew Gibbs 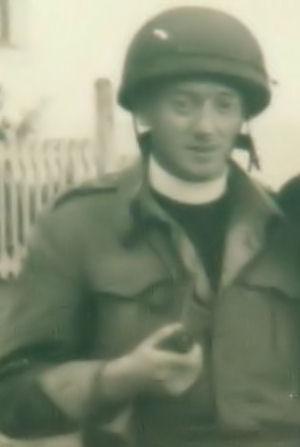