Reginald Rosoman was serving with The East Surrey Regiment when he volunteered for airborne forces during the Second World War.

He qualified as a military parachutist on Course 70, which he attended at RAF Ringway from 28 June to 9 July 1943. The instructors on parachute training course, described him as a "Clear headed man. Good course’. He was then posted to HQ Company, 9th (Essex) Parachute Battalion.

‘Reg’ met his future wife Renee at RAF Ringway. Renee, who was in the WAAF and stationed there for almost 5 years, worked in the admin office but used to sew the wings onto uniforms for some of those who qualified as paratroopers.

After serving in many campaigns, including Normandy, the Rhine Crossing and Palestine, Corporal Rosoman  joined the reserve list in September 1946. 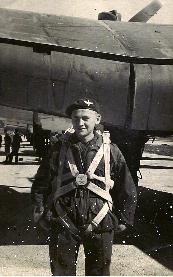