Reginald Mowlam Tarrant, from Dorsetshire, was the son of Reginald Fredrick and Nellie Dorothy Tarrant, and husband of Noreen Tarrant.

He was commissioned, as a Second Lieutenant, into The Dorset Regiment in February 1933 and promoted to full Lieutenant three years later.

On 14 July 1939 he was seconded as a Staff Officer to the local forces of British Guiana and promoted to Captain on 2 February 1941.

In 1943 he volunteered for airborne forces and qualified as a military parachutist on course 81, which ran at RAF Ringway during September 1943. The course instructors’ notes record: 'A little awkward at first, but improved and jumped really well'.

As a newly promoted Major he took over the command of Headquarters Company in the newly formed 13th (Lancashire) Parachute Battalion, which was part of 6th Airborne Division.

He parachuted in to Normandy on 6 June 1944, onto Drop Zone N, as part of the spearhead airborne assault which went in advance of the main seaborne landings during Operation Overlord.

In July he was appointed as the Officer Commanding B Company, when Major GW Bristow was wounded during the holding campaign in the bridgehead area.

In August the break-out from the bridgehead area began and the 6th Airborne Division advanced parallel to the coast towards the River Dives between Houlgate and Putot en Auge.

The battalion was ordered to capture a hill overlooking Putot en Auge and B Coy was tasked to lead the advance.

Major Tarrant was later awarded a Military Cross for his gallantry at Putot en Auge.

The citation for his award notes: ‘On Saturday 19 Aug, ‘B’ Company commanded by Major Tarrant was the advanced Coy ordered to lead the bn under fire across exposed country into PUTOT EN AUGE and so to an objective on a hill beyond. Leading his Coy with great personal dash he got them across the open country and attacked the first ridges of the hill. This he captured and advanced at once to attack the final ridge. He personally led the charge for the top of this hill showing extraordinary leadership and dash and was seriously wounded in the stomach when on the crest of the hill. Although in great pain he continued to give directions for the attack until he was evacuated. His leadership and dash were an inspiration and encouragement to his men and in the finest traditions of the Parachute Regiment.’

Major Tarrant died of his wounds on 28 August 1944, aged 31 years, and is now buried in La Delivrande War Cemetery, France. 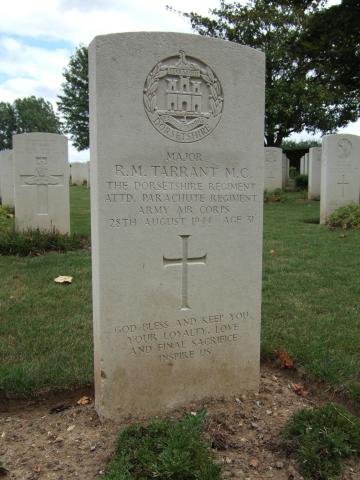