He had 6 weeks introduction to Army life at No. 17 Primary Training Centre at Ballykinler, Co. Down.  He was then posted to Markeaton Park, Derby for more training and qualified as a Marksman.

He remembered a talk by a recruiting sergeant from the Parachute Regiment, in which they were told "There are only two thrills in this world, and one of them is parachuting".  He volunteered for the Parachute Regiment and was posted to Hardwick Hall, the depot and school for airborne training. Reginald went on to RAF Ringway Parachute Jump School, taking part on course B165 and  was presented with his 'wings' on 16th June 1945 aged 19.  He went on to Albany Barracks, Aldershot, was promoted to the rank of corporal and became a Weapons Training Instructor.

He was then posted to Palestine to join the 9th Battalion at the Peninsular Barracks.  He demobed on 19 December 1947, receiving two medals: Active Service Medal with Palestine Clasp and the War Medal 1939-45.  On returning to civilian life he became a Management Accountant, married and had a family.  A much loved and missed dad and grandad. 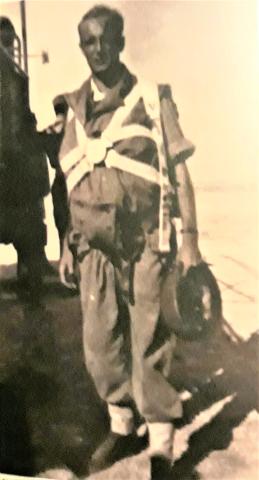