Reginald Leonard Foley, the son of Edna Foley, was a general labourer from Romford, Essex and he enlisted on 1 April 1943 into the General Service Corps.

Private Foley was assigned to 67 Primary Training Wing on 13 May 1943 and attended 17 Initial Training Centre, The Royal Berkshire Regiment, to complete his 6-week basic training, at the end of which he volunteered for airborne forces.

He attended HQ Depot Airborne Forces on 8 Sept 1943 and completed parachute training course number 85 at RAF Ringway between 29 September and 10 October 1943. His course report stated: ‘Pte Foley has jumped well any number of position in the stick exiting the aircraft’

Initially posted to the Holding wing at Hardwick Hall, near Chesterfield, he was then posted to 12th (Yorks) Parachute Battalion 29th October 1943. Emplaning on 5 June 1944 he took part in Operation Tonga as part of the Normandy campaign and larger the larger Operation Overlord.

During his time with 12th (Yorks) Para he also saw action in the Battle of Breville and took part in the outbreak to cross the river Seine returning to the U.K with the battalion in September 1944.

Upon his return, Pte Foley subsequently transferred to Royal Corps of Signals training to become a Lineman and on the 16th December 1944, he was posted to K’ Section, 5th Parachute Brigade, 6th Airborne Divisional Signals in the rank of Signalman and the trade of Lineman Group ‘C’ Class 3.

By Christmas, he was back on the continent along with the rest of 6th Airborne Divisional Signals, and saw active service in the Ardennes, Belgium. Following a brief respite in the UK between 24th February to 20th March, Sigmn Foley was back again to see further action in the Rhine Crossing and also the Advance to the Baltic.

Back in the UK for a few weeks during June and July, Sigmn Foley took the opportunity to marry his sweetheart and on the 9 June 1945, he married Nellie Tuckey in Romford (pictured).

During July 1945 Signalman Foley, along with 5th Parachute Brigade were assigned to the Far East, arriving after VJ Day, but continued with internal security and relief operations in Singapore and Java until 1946. During this time, he spent a brief period in hospital being admitted 14 May 1946 and discharged on 22 May (reasons unknown at this time).

In July 1946 Sigmn Foley left Java (South East Asia Command) on 20 March for Egypt and to come under Middle East Land Forces disembarking in Egypt on 8 August 1946 and remained part of 6th Airborne Div Signals, 5 Para Brigade, K Section. During this time, he and the Brigade took part in the internal security of Palestine. Whilst here he undertook an Underground Cable Jointing Course at the Army Signal School (Middle East) in Digla, Cairo. Upon completion of this 2-week course he re-joined the Signals Division in Palestine.

In the New Year came a new change and Sigmn Foley was transferred to 2 Parachute Brigade Signals Troops for the journey home to the U.K

Back at Perham Down, Tidworth, Sigmn Foley assisted with the reorganisation of the unit into a squadron but would not be joining them in Germany as part of the BOAR and he was released from active service on 22 Sept 1947.

The testimonial received from his C.O of K Troop Signals, 2nd Parachute Brigade Group classed his conduct as ‘Exemplary’ with the following statement.

‘Foley has shown a thorough working knowledge of his trade. He can be depended upon to tackle any job with keenness and to use his initiative. At all times he has been very willing and reliable’

He parachuted in combat with only two hand grenades after failing to attach his kit bag to himself correctly and on a separate occasion was impressed but the pretty fireworks during a night drop before realising it was German tracer fire.

He had been in the army for approximately 4 years and 5 months with only 52 days leave before finally making it home aged only 22!

Reg lived a full life with his loving wife always by his side but sadly passed away on 13 September 1994 aged 69 but I still have great memories of him to this day.

Created with information from James Foley 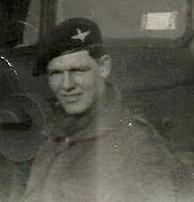