Reginald Garnett was born in the Cheshire village of Barnton in November 1917. Leaving school at 14 he began work at the local ICI plant, before joining the Army October 1939 as a Despatch Rider with the Royal Artillery.

After being wounded by a negligent discharge, Reg volunteered for the RAF and thence the Army Air Corps, which he joined in November 1941. After the customary initiation period at Tilshead, he became airborne for the first time on 9 March 1942 in a Burnaston based ‘Maggie’. A successful EFTS course, Corporal Garnett made his maiden glider flight in a Hotspur Glider at Weston-on-the-Green.

Taking part in Operation Beggar/Turkey Buzzard, Reg had to pilot a glider on a hazardous attempt to ferry Horsa gliders to North Africa,  a non-stop trip of 1300 miles. Setting off on 6 June 1943, Reg's glider encountered difficulties and was forced to set down on Bodmin Moor. A further unsuccessful attempt was made on 23 Aug 1943, before, in the finest traditions of the Regiment, a further flight was programmed for 7 September 1943. This occasion seemed to be going according to plan, until well past the point of no return, when the tug suffered an engine fault and immediate action had to be taken to keep the combination airborne. The glider was stripped of all non-essential weight and out of the door went equipment, pressure bottles and the spare undercarriage. As a precautionary measure the tug flew as close to land as possible but further malfunctions forced the glider into free flight with either an immediate ditching in prospect or a precarious forced landing. The glider landed at Perniche, in Portugal, a neutral country.

After returning to the UK, some 4 weeks later, Reg was re-allocated to further glider training and on 19 December 1943 he was at the controls taking his first flight in the Hamilcar.

On 6 June 1944 Operation Mallard was activated and Reg, together with his co-pilot Sergeant Blair joined the operation across the Channel. fortunately encountered no bad luck. Watching two other Hamilcars cutting a swath through the anti-glider poles, Reg saw his opportunity and was able to follow on and make a safe and accurate landing; allowing the airborne soldiers and their Tetrarch to exit and proceed, without hindrance, towards their battle positions.

Reg's next operation came on 11 September piloting a fully laden Hamilcar on an experimental mission.It took 1 ½ hours  to climb slowly in circular flight to a ceiling of 12,000 feet, at which point both the towing aircraft and the glider began to experience difficulty. With the aircrews almost screaming trying to grip the rarefied air the combination began to add altitude by a series of steps; a climb of 300 feet, then a loss of power and a drop of 200 feet. By this system with a profit of 100 feet in each manoeuvre a height of 16,000 feet was eventually attained.  With the controls unable to respond correctly, the crew nearly exhausted and hampered by lack of oxygen it was decided that the ultimate point had been reached. At 15,000 feet over the Isle of Wight Reg released and successfully steered the Hamilcar to a safe landing at Tarrant Rushton.

A week later Reg was piloting a Hamilcar as part of Operation Market Garden, summing up the landing in an interview with The Eagle some years later:

'Handicapped by a faulty tug. Took the decision to press on, but as a result a late arrival over the target complicated the landing and, with brakes malfunctioning on loose ground, the flight was terminated by the railway embankment. Fortunately the rapid exit of the two Bren Carriers caused neither casualties or damage.'

After a night on the LZ, and various scuffles with German troops and Dutch collaborators Reg, now joined by others, dug in under shell and mortar fire in the wood adjacent to the river. On day 6 they managed to reach the riverside only to find 6 small boats remaining to complete the closing phase of the evacuation. As they reached the opposite shore, a lone German shell struck the group as they were scrambling up the bank; landing in the soft ground absorbed the blast and Reg was knocked unconscious.

Back in the UK, Reg was posted to instruct the newly arrived re-enforcements of RAF pilots in the intricacies of operational glider flying and was eventually briefed for ‘Operation Varsity’ with an RAF Officer as co-pilot but on the eve of the operation the officer took over as aircraft captain with an RAF Sergeant as co-pilot, Reg was relegated to a back up position. It was a tragic act of fate that this Hamilcar broke up on its approach to the Landing Zone and all perished.

Reg Garnett’s war was now over and before saying farewell to the Services he made his last flight on October 15th 1945, in a Tiger Moth.

Starting a career at a Ford main dealers, and after periods of training with Ford at Dagenham, he continued as the company’s foreman for 12 years. Always ambitious and searching for satisfactory promotions, Reg became manager of a company dealing in gaming and entertainment machines and after 3 years experience used his entrepreneurial capability to become a partner in an amusement arcade in Hayling.

Reg still lives in Hayling with his wife.

Reg Garnett was born in the little Cheshire village of Barnton in November 1917, and is it not worthy of note that an overwhelming number who were to serve with the Glider Pilot Regiment were born eit 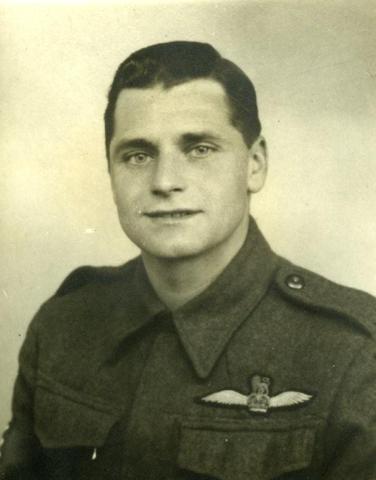