Ray Teft enlisted into the Army on 31 August 1944. Shortly after, in October he transferred to the Royal Northumberland Fusiliers and was posted to 26 Machine Gun Training Centre.

While at 26 MGTC he volunteered for airborne forces and transferred to the Airborne Forces Depot for training in January 1945. He attended parachute training course B150 which ran at RAF Ringway from 24 January  to 8 February 1945.

Ray was posted to the 13th Parachute Battalion on completion of his parachute training and took part in Operation Varsity, the Rhine Crossing, in March 1945.

He was wounded during the advance to the Baltic in May,  treated by 225 Parachute Field Ambulance and evacuated back to the UK.

After he had recovered, he attended a refresher parachute training course (R182) at RAF Ringway which ran from 8 October to 1 November 1945. On completion of his refresher training Ray was posted to the Army Air Corps' Holding Battalion until transfer to the 2nd Parachute Battalion in February 1946.

He deployed with the the 2nd Para Bn to Palestine in  April 1946 and was promoted to Corporal in 1947 while serving in Palestine.

Ray returned to the UK in November 1947 shortly before the Battalion was amalgamated. 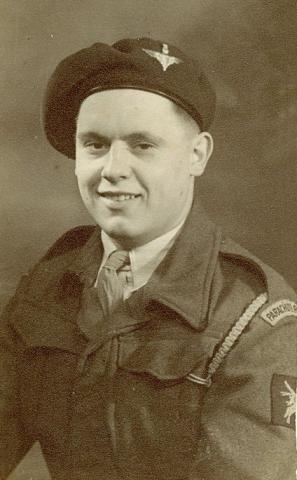