He qualified as a military parachutist on course 49, which ran at RAF Ringway in February 1943.

In the following year L/Cpl Singer took part in the Battle of Arnhem, during Operation Market Garden, as the batman for the second in command of 1st Airlanding Brigade, Col Hilaro Barlow.

On 19 September, Col Barlow was instructed to take command of 1st Parachute Brigade and co-ordinate an advance to the bridge. L/Cpl Singer was in close attendance. Both men were killed by a mortar shell as they moved forward to link up with the brigade.

Hilaro Barlow served as a Captain in the 2nd Somerset Light Infantry before the war. 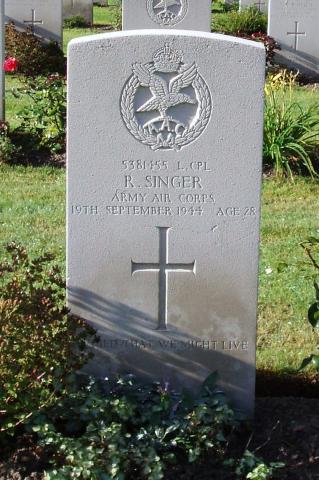