Raymond Martin was the son of Alfred and Virtue Martin, of East Croydon, Surrey.

He was serving in 2nd Battalion, The Sussex Regiment, when it was turned over to airborne forces and redesignated and reorganised as the 10th Parachute Battalion, to form part of 4th Parachute Brigade, in January 1943.

By midnight on 10 September both 10th Para Bn and 156 Para Bn were in striking distance of Castellanata and the attack on German forces holding the town was launched at dawn the following day.

Sgt Tex Banwell, of No 1 Platoon, A Coy, was leading the advance of 10th Para Bn up the main street when a German Spandau machine gun opened fire. Banwell sought cover in a nearby water trough. Pte Martin, broke cover from a doorway on the other side of the street in an attempt to join Sgt Banwell but was felled by the Spandau.

Pte Raymond Martin died from his wounds on 12 September 1943, aged 21 years, and is now buried in Bari War Cemetery, Italy. 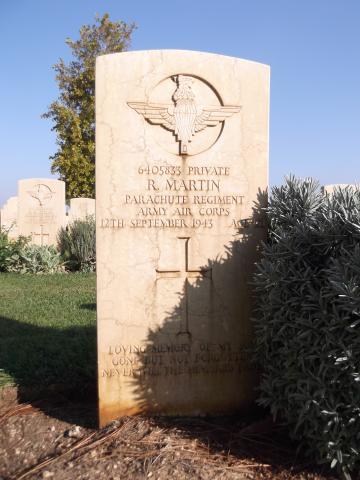