Ray Sherrif was born in 1921 and joined the Oxfordshire and Buckinghamshire Light Infantry at the age of 16 and his first posting was to Bombay, India in 1937. He was still there when war was declared.

Returning to England, to fight on the home front, Ray left the infantry to join the Airborne Forces. He was on one of the earliest parachute courses at R.A.F. Ringway, course 3 advanced, and on completion he was posted to the 3rd Parachute Battalion.

“Churchill wanted men to start airborne forces, so I volunteered for SAS, Para’s, Air gunners – I thought that was the best way you were going to get into action. By that time, my best friend was a POW already, and in my heart I thought it would be nice to get over to Germany and help him to escape.”

On the first parachute operation in Tunisia, North Africa, November 1943 he survived a bullet hitting him in the chest, his life was possibly saved by the I.D. tags and two school sports medals he was carrying in the chest pocket of his shirt.

Ray’s next jump was six months later, into Sicily. He describes that time as being “pretty horrible”, not least because they almost got dropped into Mount Etna! They returned to England in December 1943, and resumed training in Lincolnshire for the next operation. Though they didn’t know it at the time, this would be Arnhem, where Ray lost his sight.

By this time Ray was a Corporal in 1 Platoon, ‘A’ Company and responsible for a Bren gun team.

“We were dropped at Arnhem on 17 September, 1944. We got about five miles before we came under heavy fire and had to take cover. I was in charge of a Bren group when an 88 mm landed. It felt as though a handful of gravel had been thrown in my face. I rubbed my eyes, knowing I was badly injured, though I kept rubbing, thinking – you’ll be able to see in a minute – but nothing happened.”

During the continued fire fight, Ray was also shot in the leg. He was taken to a Dutch eye hospital, where he was treated by one of the best ophthalmologists in the country and told he would never see again. Though the staff at the hospital tried to keep him from being taken as a prisoner of war, complications with his leg wound meant he was transferred to an ordinary hospital.

Ray eventually ended up at Stalag XIB, a Prisoner of War camp between Hanover and Hamburg. Incarcerated with 17,000 other POW's, Ray thought his time was up, but it was by lucky circumstance that the man in charge there should be legendary RSM: J.C. Lord. Ray gives Lord the credit for keeping his spirits up.

“Lord got that place organised - with exercise and discipline, when everyone else had thought all was lost. He got me a uniform, boots, beret, stripes and ordered medical orderlies to take me to the washrooms in morning. He used to come and see me at least once a week, and wanted to get me marching again.”

When Ray and the other POW’s at Stalag XIB were freed, he returned to England. He was sent to hospital in Oxfordshire, where he first heard about St Dunstan’s.

“I hated the thought of going into anything to do with the blind, and white sticks and what have you. I eventually did go along to St Dunstan’s centre at Church Stretton, and I felt very humbled to see the people there, some much worse off than me. Most of my friends, I made there.”

Having joined the army straight from school, Ray had no trade to speak of.

St Dunstan’s suggested starting a business, for which they loaned him the capital. He set up a tobacconists in Kent with his wife. After his wife became ill, Ray sold the shop and trained as a telephonist, before taking up a post at an engineering company where he stayed for the next 20 years. Throughout this period, Ray maintained contact with members of the original 3rd Parachute Battalion, determined to do another jump. He eventually spoke to a friend who arranged for Ray to do a tandem jump. Ray describes the experience as “thrilling – completely different to a solo jump.”

Ray continued to parachute, completing 15 jumps. His final jump was in 2004, for the 60th anniversary of Arnhem.

“I think I’ve tended to get on with life. I’ve managed to have a go at climbing, long distance swimming, a five mile swim, 15 marathons, parachuting – I’ve had a go at most things.” 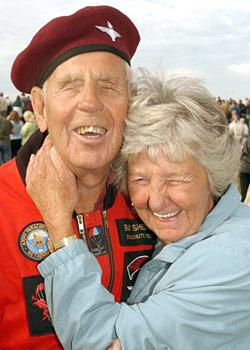