Raymond Boyce Moore was born in Barry, South Wales, but was brought up in Manchester, and then later in the outskirts of Liverpool. After leaving school, he began work as a trainee salesman at 16 with Bibby's, the soap manufacturers, in Liverpool and volunteered for the Home Guard in 1941.

He joined the Army and following service with the Highland Regiment and the Black Watch he trained for Airborne service. He completed his training at the Parachute Training School  RAF Ringway in October to November 1943, on Parachute Course 89 (a course which included the actor, Richard Todd). His pass notes described his performance as: 'above average, very reliable'.

Following the return of 1st Airborne Division from the Mediterranean, Lance Corporal Raymond Moore joined A Company, 10th Parachute Battalion along with other recent recruits and commenced training for the impending invasion of North-West Europe. While 6th Airborne Division was chosen for D-Day, 1st Airborne Division faced numerous cancelled operations, before they were finally deployed for Operation Market Garden.

Now serving with 5 Platoon, A Company he emplaned at Spanhoe in a Dakota and took part in the Second Lift to Arnhem on 18 September 1944. When he dropped into action, he was cut off from Allied force and became trapped in woods behind enemy lines with eight fellow Paras. He was unable to join the evacuation on the night 25-6 September 1944. During this time, he waited and prepared himself for the Pegasus 1 escape of 135 men on 22 October 1944.

During the night of the escape, he shared a packed jeep ride with his fellow escapees, including Major Tony Hibbert, who was injured in an accident as they collided with another vehicle unseen in the dark, after crossing the Rhine.

He was indebted to Theo Braafhart, a local farmer, and to Jean Lamberts, a woman who lived at De Lange Hut close to where the Paras were hiding near Wolfheze. These Netherlanders effectively saved his life. 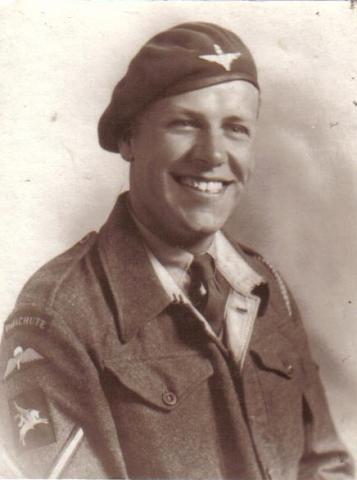