Ralph Jones, aged just of 19 on the 15th January 1942 was called up to join the army. He was at first posted to The South Staffordshire Regiment stationed at Gt. Yarmouth.

He was then transferred into the 103rd Anti-Tank Regiment Royal Artillery in December 1942. It was at this time he met his wife, who he married 1st April 1944. After 6 months training this unit became the 4th air-landing Anti-Tank Battery, part of 6th Air Landing Brigade, 6th Airborne Division.

On the evening of 5th June 1944 Ralph was in glider 119, being towed by a Halifax, on his way to Normandy. Ralph got badly injured, he was found unconscious by 2 orderlies. It took 4 days for him in reach a hospital in England.

Christmas day 1944 Ralph was back towing anti-tank guns with jeeps in near arctic conditions after disembarking in Ostend. This time having been transported by ship from Tilbury Docks, London. He suffered from terrible frostbite driving a jeep with no windscreen in these conditions in the Ardennes.

After this second visit to Europe he got some leave and gunnery practice in England. All ready for the next airborne operation, crossing the Rhine.  It was during action on this operation that he was captured by the German forces and was transported to Stalag 11B. He was eventually released by The 7th Armoured Division and flown back to Lydd in Kent.

Here Ralph  ended his service with The 6th Airborne and was posted to Haverford West in South Wales. Where he took part in V.E. day victory parades.

Then he started training all over again. This Royal Artillery Regiment was posted to the Hartze mountains in Germany as occupation troops. Here he enjoyed participating in Winter sports. After spending a Christmas on snow covered mountains once more, he received a call asking if he would take class B release. By the 23rd March 1946 Ralph finished his service in the army. 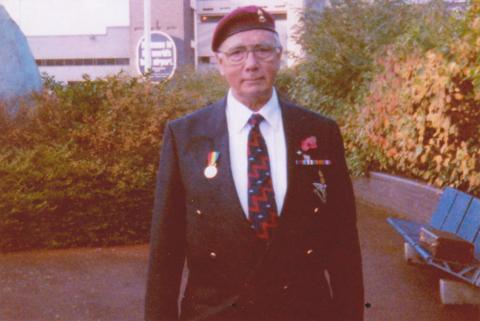