Driver Ralph Evans was born in a small mining village called Tonyrefail about sixteen miles from Cardiff and resided in Surrey prior to joining the Royal Army Service Corps. He  volunteered for duties with No 2 (Parachute) Commando when the four troops of No 2 Commando were designated to form the nucleus of British Airborne Forces, following Churchill’s directive in 1940. On 2 July, C & D Troops moved to the Benchill and Gatley areas of Manchester to link up with A & B Troops and be within easy reach of Ringway Airport. All ranks were granted a lodging allowance and billeted in civilian households as there was no barracks accommodation locally.

Driver Evans was introduced to ground training along with the rest of the men of No 2 Commando on 8 July. After some crude ground training exercises the men were split into groups of six for air experience flights as most had never flown before.

On 13 July RAF instructors demonstrated live parachute jumps including two by the Pull Off method: this involved standing on a small open platform that had been fitted in place of the rear gun turret of a bomber; the parachutist then faced into the slipstream and released his parachute. The billowing parachute jerked the parachutist off his platform into space. Aside from being a scary method of parachuting it was also an impractical method for mass airborne drops and was never introduced to the trainees. The other six drops were through a three feet aperture in the fuselage floor of the converted Whitley bomber using a static line to deploy the parachute.

Six Whitleys had been converted for use at the embryonic Parachute Training School and the first live drops for the trainees from No 2 Commando started shortly after the demonstration jumps. The trainees were taken up in sticks of eight and dropped singly or in “Slow Pairs” on Tatton Park. A number of jumps had taken place on 25 July without major event when Whitley K7230 took up a further stick of eight men from C Troop including Driver Ralph Evans, Corporal Ernie Chinnery (attached from the 17/21st Lancers) and Cpl Jim Bushnell (attached from the Royal Artillery).

Evans launched himself through the hole and a red flare went up from the ground signalling a halt to proceedings. Driver Evans had become the first fatality at Ringway’s Parachute Training School when his canopy became tangled and failed to open properly. Parachuting was immediately suspended and No 2 Commando was sent to Scotland for field training, deer stalking with game keepers and unarmed combat at the School for Irregular Warfare at Achnacarry.

An inquiry was held into the death of Driver Evans and other shortcomings in the training regime. Major Rock and Sqn Ldr Strange were at odds with the Air Ministry over the suitability of the converted Whitley bomber for parachuting purposes. However, the critical shortage of aircraft meant that their pleas for something more suitable fell on deaf ears.

Rock and Strange then approached Raymond Quilter of the GQ Company, a parachute manufacturer for his help.Within short order Quilter had produced a new bag for the Irvin-type parachute in which the rigging lines of the parachute were withdrawn from the bag and fully extended before the canopy deployed. A hectic period of testing and adjusting in early August resulted in what became known as the GQ X Type statichute.

No 2 Commando resumed their parachute training on 14 August. Driver Evans’ death was not in vain; the X Type parachute remained in service for a long time and the principles of parachute deployment developed immediately after his death are still used in modern military parachuting. 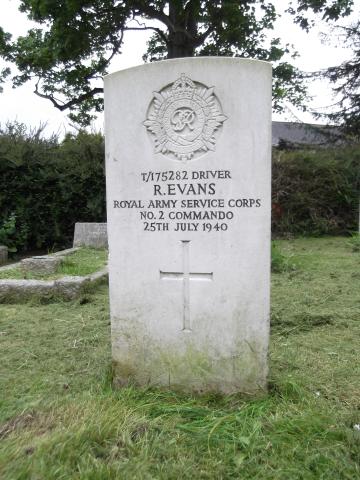