His family had a long tradition of serving in the British Armed Forces and Pine-Coffin was commissioned into The Devonshire Regiment, as a Second Lieutenant posted to 2nd Battalion on 1 September 1928. He rose through the ranks during postings in India with 1st Battalion and Depot back the UK, before joining the 342nd M.G.T.C. at Gosport as the Adjutant in mid-September 1939.

Pine-Coffin was a fine boxer, representing the Army against Oxford University and being runner-up in his weight in the Army RAF Championships in India. In 1940 he suffered the very great blow of the death of his wife, Joan.

In March 1940 he was posted to the Infantry Base Depot, joining 2nd Battalion, The Duke Of Cornwall’s Light Infantry in 4th Infantry Division, and went with them to France as part of the British Expeditionary Force. He saw considerable action with his Battalion in May and early June 1940, eventually being withdrawn from the harbour at Dunkirk.

As part of the 1st Parachute Brigade, the 3rd Parachute Battalion was allotted to Gen Anderson’s 1st British Army, for the invasion of North Africa in November 1942. After some hectic moves to Maison Blanche in North Africa, the Battalion emplaned for the drop at Bone on 12 November 1942. A successful operation was carried out that saw the Battalion in action for 5 days. 3rd Parachute Battalion then served in North Africa until the end of the campaign in 1943, notably at Bou Arada and Tamera. Pine-Coffin's actions during the campaign resulted in him being awarded the Military Cross in late September 1943. He left 3rd Battalion just prior to the invasion of Sicily after being called back to an appointment as Commanding Officer of the 7th (Light Infantry) Parachute Battalion, which formed part of the 5th Parachute Brigade, 6th Airborne Division.

After an intensive training period for the invasion of the North West Europe, Pine-Coffin's 7th (Light Infantry) Battalion played an important role in the 6th Airborne Division's airborne assault around the River Orne in the early hours of 6 June 1944. Tasked with reinforcing Major Howard's coup de main force, who were to seize the 'Pegasus' and 'Horsa' Bridges, the successful defence of these bridges was vital to 6th Airborne Division's objective of securing the Allied eastern flank.

Pine-Coffin dropped with his Battalion at 0050hrs; they began to arrive at the bridges at about 0140hrs, taking up positions in Bénouville and Le Port, west of Caen Canal. With 7th Battalion's arrival, Pine-Coffin succeeded Major Howard to command of the bridges' defence. Despite the scattering of 7th Battalion which left them at 40% strength 7th Battalion held their position against a sustained attack by the German 716th Infantry Division and elements of the 21st Panzer Division until they were finally relieved on the arrival of the 3rd Infantry Division's 2nd Royal Warwickshire Regiment at 2115hrs.

Shortly afterwards, on 10 June, Pine-Coffin was ordered to plan for an operation to take the Le Mariquet woods, which the remnants of the German attacking force had retreated into. Just two of the 7th Battalion's companies were present supported by tanks, but they were successful in taking the woods, and captured up to 100 soldiers. The 7th Battalion would continue to be engaged in defensive battles in the are, despite concerns by Pine-Coffin that his Battalion was greatly fatigued, until the Allied breakout to the Seine in August. Finally, in mid-September, the 6th Airborne Division was withdrawn back to Britain to recuperate and re-organise. Pine-Coffin was one of many soldiers awarded medals for their service in Normandy; he was awarded the Distinguished Service Order (DSO) for his command of the Caen Canal bridge's defence on 6 June.

After Germany launched its Ardennes counter-attack in December 1944, the 6th Airborne Division was rushed to Belgium to reinforce the Allied defence. Pine-Coffin's Battalion had limited involvement and, after Germany's offensive was defeated in January, were withdrawn to the Netherlands and soon afterwards to Britain in February, 1945.

The 7th Battalion next saw active service in the Allied airborne assault over the Rhine on 24 March 1945. His Battalion's objective was to seize and hold positions near Hamminkeln, and provide cover for the rest of 5th Brigade. The Battalion was the last of its Brigade to make the drop, doing so whilst subject to fierce German attack from flak and ground forces.

Pine-Coffin sustained serious wounds to his face during the battle but refused to leave for treatment and continued to move around his Battalion's positions encouraging his men. He was instrumental in rallying his Battalion to hold out against German counter-attacks, which played a pivotal role in the successful completion of the Brigade's main objectives. Pine-Coffin was later awarded a Bar to his DSO for the important role he played in the success of the operation, which was the 7th Battalion's last parachute jump of the war. After the success of the operation, 7th Battalion took part in the Advance to the Baltic, and ended the war with the rest of the Division at the Baltic port of Wismar, in May 1945.

Pine-Coffin continued as CO after VE Day, serving in the Far East and later Palestine, until he returned to command the 1st Battalion, The Devonshire Regiment in 1947, deployed to Malaya in 1948. He was Mentioned in Despatches for service in Burma in 1946, and again in the early stages of the Malayan Emergency, before overseeing the move of 1st Battalion back to the UK based at Colchester in February 1951.

Geoffrey Pine-Coffin was highly regarded as a natural gentleman, brave, sensitive, compassionate, but tough in battle. He was much loved and respected by his men of 7 Para. His Second World War diaries were the basis for The Tale of Two Bridges (2003), adapted by Barbara Maddox and self-published by his son, Peter Pine-Coffin.

With assistance from Bob Hilton 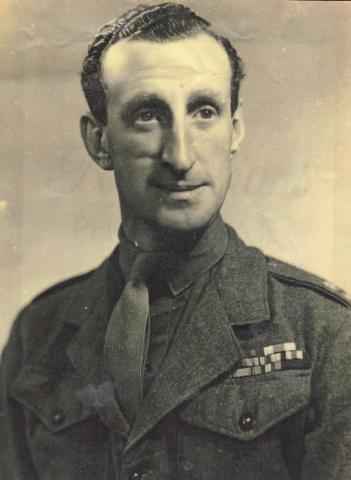