{ Colonel in Chief The Parachute Regiment }

His Royal Highness began his career in the Armed Services in March 1971, when he started a four-month attachment with the Royal Air Force at Cranwell, Lincolnshire. On 8th March The Prince flew himself to RAF Cranwell to train as a jet pilot. At his own request, The Prince had received flying instruction from the RAF during his second year at Cambridge University. On 29th July, towards the end of his stay at Cranwell, The Prince of Wales, accompanied by two fellow cadets, made his first parachute drop from an Andover into Studland Bay, Dorset. In September 1971, after the passing out parade at Cranwell, The Prince embarked on a naval career, following in the footsteps of his father, grandfather and both his great-grandfathers.

The six-week course at the Royal Naval College, Dartmouth, was followed by service on the guided missile destroyer HMS Norfolk and two frigates. The Prince qualified as a helicopter pilot in 1974 before joining 845 Naval Air Squadron, which operated from the Commando carrier HMS Hermes. On 9th February 1976, The Prince took command of the coastal minehunter HMS Bronington and left the navy in December 1976.

The Prince of Wales holds honorary rank and appointments in many branches and Regiments of the Armed Services. On being appointed Colonel in Chief The Parachute Regiment on 11th June 1977, The Prince asked to take part in the Parachute Training Course and in 1978 he attended Parachute Course 841a at RAF Brize Norton.

The course lasted from the 17th to the 28th April 1978. The Prince felt he could not "look them in the eye" or wear The Parachute Regiment's famous Red Beret and Para Wings, unless he had done the course. He told his biographer, Jonathan Dimbleby, 15 years later:

"I felt I should lead from the front or at least be able to do some of the things that one expects others to do for the country."

In 2006, The Prince was promoted to Admiral in the Royal Navy, General in the Army and Air Chief Marshal in the Royal Air Force. As Colonel in Chief The Parachute Regiment, The Prince avidly visits the Regiment as shown below and takes a personal interest in supporting where he can bereaved families and the wounded.

At the end of a busy operational year for the Regiment The Prince presented Afghanistan Campaign Medals in Colchester on 2nd December 2008 and formally opened Airborne Assault, the new Museum of The Parachute Regiment and Airborne Forces on 8th December 2008. 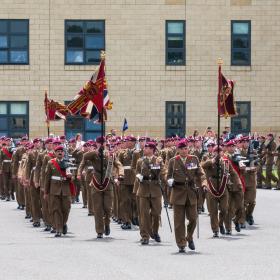 The origins of the Colours can be traced back to banners which were used as a rallying point for a military force, or to denote the location of a commander or the force’s headquarters, in the field

Visits to the Parachute Regiment by HRH Prince of Wales.