Philip Edward Nixon was the son of Edward and Flora Nixon, of Oldham, Lancashire and he attended the towns Waterloo school and Sunday school. His big love was football, gaining a place in the local youth team playing in the local Sunday school league. His other passion was motorcycles and he spent much of his spare time repairing and rebuilding old motorbikes. On leaving school he got an apprenticeship as a motor mechanic with a firm in Oldham leaving at the age of 21 to become a driver with a Gas meter company.

On the 5 March 1940 he was ‘called up’ and joined the Royal Army Service Corps, and after initial training he became a Physical Training Instructor.

Cpl Nixon was in the crew of RAF 271 Squadron, Dakota KG-374, based at Down Ampney. The aircraft was hit by Flak while on a re-supply mission and crashed at Reijerskamp, north of Wolfheze at 15.16 hours on 19 September 1944. The following details appeared in the ‘London Gazette’ of 13 November 1945: “On September 19, 1944, F/Lt Lord was pilot and captain of an aircraft detailed to drop supplies to our troops, who were closely surrounded at Arnhem. For accuracy this had to be done at 900 feet. While approaching the target at 1500 feet the aircraft was severely damaged and set on fire. F/Lt Lord would have been justified in withdrawing or even abandoning his aircraft but, knowing that supplies were desperately needed, he continued on his course. Twice going down to 900 feet under very intense fire, he successfully dropped his containers. His task completed, he ordered his crew to abandon the aircraft, making no attempt himself to leave. A few seconds later the aircraft fell in flames, only one of the crew surviving.”

Husband to Ivy Nixon of Chadderton, Oldham, Cpl Nixon was killed in action on 19 September 1944, aged 29, and was initially buried along with the other crew members alongside the aircraft. He was re-interred to Arnhem Oosterbeek War Cemetery on 22 August 1945.

Created with images and information kindly supplied by R Hilton 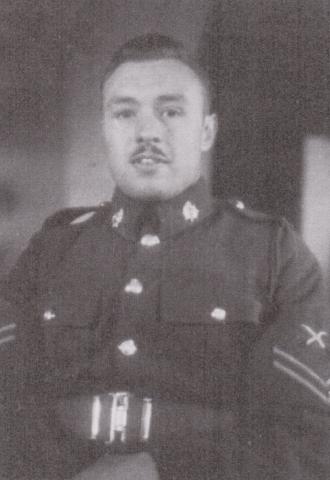