Philip Scarr was born in 1920 in Lewisham.

He enlisted into the Royal Engineers, before transferring to the Intelligence Corps, and by the summer of 1944 he had been posted to the 89th (Parachute) Field Security Section in the 1st Airborne Division, then stationed in Lincolnshire.

Cpl Scarr and Cpl Smyth were both on the 2nd Glider Lift of Operation ‘MARKET’, which took place on Monday, 18 September 1944. After landing safely in their Horsa glider on LZ ‘X’ near Renkum in Holland, they moved to the area of the Divisional Headquarters and linked up with those who had landed on the 1st Lift, the day before.

Cpl Scarr was wounded by shrapnel from a mortar round, whilst in the area of Divisional HQ at the Hartenstein Hotel, on the 25 September 1944.

That same night the withdrawal of the remnants of the 1st Airborne Division was ordered, and what was left of the Section made their way down to the River. Although four members made it across in boats, CSM Armstrong (WIA), Sergeant Ramage, Corporals Hanet (WIA)and Gorrie (WIA), Cpl Scarr had to swim across to avoid capture.

He is reported as dying of exhaustion in Nijmegen in the early hours of the 27 September 1944.

Some brief details of Philip’s life come from his nephew: “I was only 11 years old when my Uncle was killed, but I remember he had a good knowledge of German and we played war games when he was home on leave! I have his medals and his watch. I also have a scrap-book kept by his girlfriend – Dori – who served at Fulbeck Hall. I don’t know her surname, she came from Czechoslovakia, just before the Germans went in. I met her after the war, then I think she married.” [1]

Cpl Scarr was one of only four Arnhem personnel that was initially buried in the Marienbosch Cemetery, the temporary British Cemetery next to the Casualty Clearing Station in Sophiaweg, Groesbeek (723598). His  initial grave was II.M.2. He was moved in 1947 to the CWGC cemetery at Jonkerbos.

The son of William Donn and Margaret Alice Scarr, Phillip is buried at the Jonkerbos War Cemetery at Nijmegen, Plot 10. E. 8 and is remembered on the Lewisham United Reformed Church memorial. 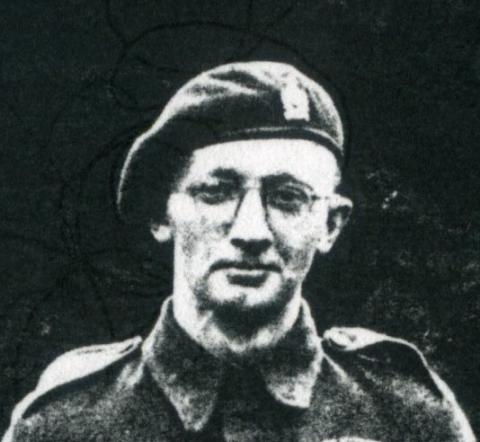