Peter Wyke was born in Doncaster on 15 April 1925 and moved to Kettering, Northants when 10 years old.

He became an apprentice joiner with Timpson Engineers, and joined the Home Guard at 16 years old. As soon as he was old enough he enlisted in the Northamptonshire Regiment and then volunteered for airborne forces. He attended parachute course 93, which ran at RAF Ringway from 29 November to 13 December 1943. His instructor comments, “Very good, capable man, jumped well”.

Pte Wyke was posted as a reinforcement to the 10th Parachute Battalion, part of 1st Airborne Division, and placed in 11 Platoon, B Company at Thorpe Satchville. His Platoon Commander was Lieutenant Mike Broadway.

On Monday, 18 September 1944 he took off from Spanhoe airfield as part of 1st Airborne Division's second lift for Operation Market Garden and parachuted onto DZ Y, Ginkle Heath near Ede, 8 miles north west of Arnhem.

After the battle he was taken prisoner when he was discovered in a house with a wounded glider pilot, the father of the household was shot for hiding enemy soldiers. Pte Wyke was sent initially to Stalag 12A for processing. Later he was sent to Stalag 4B at Muhlberg on the Elbe, his POW number was 075336.

Upon return from POW camp in Germany he was given some leave and then spent time as a guard of German POWs in England before being discharged from regular Army service on 8 December 1945.

Whilst he had been a POW he met a man called ‘Alfie’ Payne and upon return to the UK he went round to let 'Alfie's' parents know that he was okay, which is when he met the next door neighbours’ daughter. Peter married her in 1946 and they had a son and daughter.

For the rest of his working life he was employed at Corby Steel Works as a Steel Erector.

Peter Wyke died on the 10 May 1986, just one week before the 10th Parachute Battalion’s Annual Reunion. Those who attended signed a menu-card and sent it to his widow.

Compiled by Bob Hilton with assistance from Martin Wyke 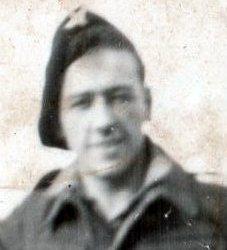