In 1954 he joined The East Lancashire Regiment (ELR) and by 1955 he became a 2nd Lt Platoon Commander ELR, Luneberg. from 1956 to 57 he was Lt Training Officer ELR Depot in Preston.

In 1961 Peter transferred to 1 Lancs Reg (PWV), based in Hilden, Germany as a Bn IO/Asst Adjt. During this time he completed SAS survival course, US Army ranger course and Free Fall Para course.

In 1963 to 65, now as a captain he completed the Commando Course and became an Army instructor with the Commando School ITCRM in Lympstone. From 1965/6 he was detached to Foreign Office in the Far East.

1970 to 72 as a Major Coy Commander 1 QLR in Osnabruck and Belfast. Was awarded GSM with N  Ireland clasp.

In 1976 Peter was selected for promotion to Lt Col but following illness decided to retire from the Army. Peter went to work in 'Commodities' in The City. He helped set up and develop The International Petroleum Exchange (IPE). He became it's Chief Executive in 1986. In 1994 Peter was awarded an OBE, before he retired in 1996.

"I served in 1 Para for 9 years in the 1950's and 60's, I was injured out, did a stint in the police and mining and came back in to the RAF as a PJI, when qualified I was posted to 16 Para, spent some time at 22 and with the SBS at Poole so my WO1 was with the parachute school and not Para. In all I spent 30 years with  Para Bde.

I remember Peter joining 1 Para, there was a large intake of officers from Sandhurst (I think) and it was a good bunch, I think that they had just dispensed with those silly sticks they used to walk around with and 'batmen' were going out of fashion, officers needed to wipe their own bottoms.

The Bn had been practising river crossings where you wrap all of your kit in a poncho and swim across a river, the theory being that air trapped in the poncho would cause your kit to float, but all of your clothing had to go in the poncho so you swam starkers, the new bunch of officers missed the practice swims on Hawley Lake when we almost drowned a number of lads.

Jumped on Otterburn (I think), and (repeating myself) tabbed for a couple of days and nights, it was freezing, blowing a gale, raining, and miserable. Came to a wide river at night, moon came out so could see what was going on, stripped and folded kit in to poncho, private part shrank to 8 inches, advised the new officers about how to pack their kit and entered the water, first few blokes would link toggle ropes to help others to cross, the river was running fast. Peter was to be in the first batch to cross which I was also in.

Nothing anyone could do to help him, so I thought that would be the last we would see of him, I did note however that he was slowly bobbing towards the far bank and assumed that provided he did not drown first he was at least going in the right direction.

Got to the other bank, got dressed as quickly as possible then gave the guys behind help to scramble up the bank as they came out of the water.

The whole company were dressed and ready to move off within 30 minutes, I had already told the Company Commander (whoever he was) that Peter had bobbed off downstream and he was not at the RV.

We moved about 100 yards to a nearby wood to get better sorted, the moon was up, the field was frosty so we had excellent light, suddenly what appeared to a a big vole could be seen trudging from the direction of the river towards our second RV in the woods.

It was Peter, still clutching manfully to his Sten and dragging his poncho full of gear behind him. Barefooted and bare arsed, frozen almost solid he cut a forlorn figure. As he approached the RV there was a round of applause from the blokes in the woods.

Someone shouted 'for f**ks sake get dressed you will frighten the cattle in that field' I do not know if it subsequently affected his love life, but I marked him down as a tough little bugger."

Peter was a Trustee of The Airborne Assault Museum and was responsible for collections management. He accessioned over 1000 items into the archives. 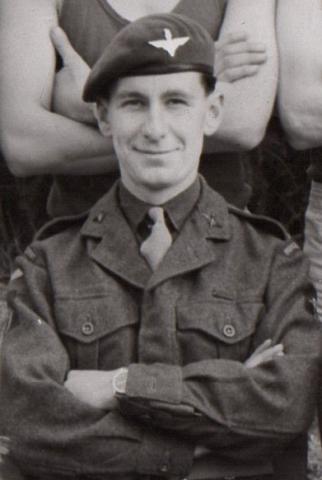