Peter Thomas Earwicker was the son of Thomas Henry and Eva Kate Earwicker, of Sidcup, Kent.

He was enlisted into the Royal Armoured Corps and subsequently served with the Airborne Light Tank Squadron RAC. The unit was expanded and redesignated as the 6th Airborne Armoured Reconnaisance Regiment (6AARR) in January 1944 by which time Earwicker was serving as a Lance Corporal.

L/Cpl Earwicker volunteered for parachute duties and qualified as a military parachutist on course 99, which ran at RAF Ringway from 19 January to 3 February 1944. The course notes record that he was 'Cheerful, good hard worker, average'.

He was later promoted to Corporal in the regiment's Harbour Party, which consisted of approximately fifteen men who were trained parachutists. Their role was to jump with the leading pathfinder units, reconnoitre and secure the area to which the regiment would later deploy by glider.

Cpl Earwicker was part of the spearhead force for the Normandy Landings. He took off in a converted Stirling of 620 Sqn from RAF Fairford with four other members of the Harbour Party shortly before midnight on 5/6 June 1944.

Unfortunately the aircraft was hit by flak and crashed at Château de Grangues - killing all 19 parachutists on board and the six air crew. For further information about the crash site, from the 591 (Antrim) Parachute Squadron website, please click here.

The other members of his harbour party stick who died in the crash were Lt Raymond Belcher, Tpr Michael Done, Tpr George Lamont, and Tpr Arthur Wilson. 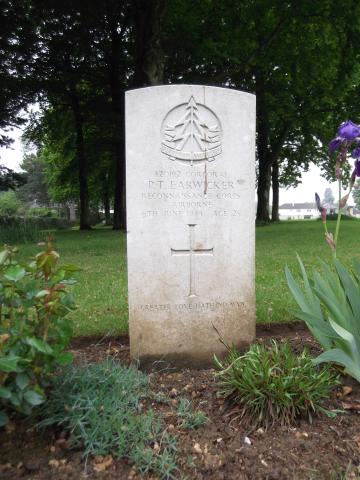