2nd Lieutenant Field was commissioned into the Queen’s Royal Regiment and served with British Army of the Rhine (BAOR) and Malaya. After attending Staff College, 2nd Lt Field spent two years at the US Military Academy at West Point. He was injured on his final jump in a course to earn his American parachute wings when his main canopy did not open and his reserve did not do enough to arrest his fall.

In 1956 he served with the 2nd Parachute Battalion in Suez. Landing in Port Said, Lieutenant Field, along with his platoon, commandeered a Coca-Cola truck to take them to Al Qantarah. The battalion was ordered to cease fire, and moved to Cyprus in 1957.

In Platres, Lieutenant Field was led to two Eoka hides. The first was full of weapons, and in the second, Lt Field discovered three men at the end of a tunnel. A later citation stated: ‘On the night of 15 Jan 1957 he led a patrol which was guided to the area of a terrorist hide near Yerakiaes. This patrol pushed on ahead of the guide to surround the area and found the hide on their own. Lt Field, at considerable personal risk went down the shaft of the hide himself and through a tunnel system before he discovered three badly wanted terrorists, with their automatic weapons at the far end, and captured them.’

Lt Field recalled that: ‘They were motionless but I wasn’t! I backed out fast and climbed up the ladder to find the rest of my party nearby. A policeman called down to the men to surrender and they came up. We were delighted to have such a catch.’

Soon afterwards, intelligence was received which indicated that Eoka terrorists were sheltering in a village, and Lieutenant Field was ordered to locate the men. Before dawn, he surrounded the houses, then moved in and began to search for the terrorists. The owner of the second house refused to let Lt Field and his team in, and as they forced their way into the house, a man was trying to climb out of a side window. In another room there were more men with weapons and equipment. In the confusion, Lt Field opened fire and wounded two men, resulting in their surrender.

As a result of the two operations, Lt Field was awarded an Military Cross (MC) for his gallant services, courage and persistence. His citation states: ‘Lieutenant Field has taken a leading part in the handling of night patrols and ambushes in Operation Sparrowhawk in the Kyrenia Hills and later in the Troodos Mountains. On these and several other less successful but just as arduous occasions in most difficult mountain country and severe climatic conditions Lt Field has shown most conspicuous qualities of leadership of which the most noticeable are persistence, courage and tactical skill.’

In 1966 Captain Field was posted to Aden, and four years later began two tours of Northern Ireland and then Iraq.

Between 1973 and 1976 Lt-Col Field was the Commanding Officer of 1 PARA, serving in Berlin. He had a staff appointment in Norway before going to Rhodesia to help supervise the election that was eventually won by Robert Mugabe. There he had a delicate and dangerous role in which he had to persuade well-armed and volatile insurgents to come out of the bush, hand in their weapons and move peacefully to special camps. He had, on one occasion, to go into the bush by himself to negotiate with a trigger-happy group of rebels. Well aware of the unpleasant consequences of being taken alive, he pinned a white disc to his back and ordered his signaller to shoot him rather than let him be captured.

Colonel Field was deputy commander of 3 Brigade in Northern Ireland before retiring from the Army in 1983 to live in Wiltshire.

Peter Field married Diana Thompson in 1956, and had one son and two daughters.

By Rebecca Blackburn with information supplied by The Pegasus Journal 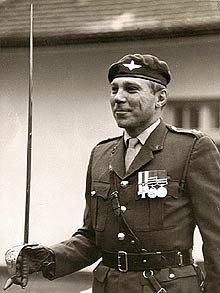