Soldier and adventurer who built clinics in Afghanistan and was roughed up by the Taliban.

Brigadier Peter "Scrubber" Stewart-Richardson, who has died aged 89, was a decorated Guards officer, a commander of a parachute company and an intrepid aid worker for the charitable organisation that he founded.

When Stewart-Richardson retired from the Army in 1981, his original plan was to join the Afghan Mujahideen in their fight against the Soviet invaders. But the British authorities would not give him security clearance and it was not until some time after the Soviet Union pulled out its forces that he was able to go to Afghanistan. He made his first visit in the early 1990s and, at that time, there was shooting and shelling in Kabul. He helped to renovate a hospital at Chak-e-Wardak, which involved convoying a large consignment of discarded hospital equipment from Peshawar, a hazardous journey.

A cousin of Ahmad Shah Massoud (a charismatic leader of guerrilla forces) then approached him seeking his help in converting a basic first-aid post at Rokha into a maternity clinic for the impoverished people of the Panjshir Valley, where the fiercest fighting with the Russians had taken place.

Here two thirds of the women could not read or write and there were high rates of infant and maternal mortality. With the help of old comrades who bought their own air tickets, paid for labour and provided expertise, the site was cleared of syringes and other detritus, then two wards were built, solar-powered and equipped with a vaccine refrigerator. The venture led to the foundation of Afghan Mother and Child Rescue (AMCR).

Stewart-Richardson was undaunted by obstacles, whether recruiting fellow old age pensioners to help him transport a refrigerator over the 15,000 ft Anjuman Pass in the depths of a ferocious winter, leading a march over the mountains shortly after a heart attack, coping with local warlords, or dealing with the Taliban.

During several encounters with members of that last group he was roughly handled, but he invariably won them over with the force of his personality. One tense encounter – when the Taliban, aggressively rummaging through his rucksack, pulled out first a snapshot of his wife then a camera – ended with the fundamentalists cheerily assembling themselves for a group photograph. They knew him as “the man with the gold” because he travelled across the mountains carrying dollars. By 2000, the Rokha clinic was up and six more followed. Establishing bakeries and sewing businesses also helped widows to support themselves. In 2008, he was appointed OBE (Civil) for charitable work.

Peter Neil Ralli Stewart-Richardson, the son of Lt Col Neil Graham Stewart-Richardson DSO and Alexandra Ralli, was born on February 9 1926 in London and brought up at Pitfour Castle beside the River Tay. His grandfather, Sir James Stewart-Richardson, was the 14th baronet. His father died when he was eight. Peter was educated at Eton and, having joined the Army in 1943, was commissioned into the Coldstream Guards the following year.

He did not get to Germany until early May 1945, too late to see active service, and it seemed as if later he was trying to make up for the adventure he thought he had missed. He found himself in a Europe teeming with displaced people. This also had a profound influence.

After a spell with 5th Bn Coldstream Guards, near Cologne, he transferred to 3rd Bn in Palestine. In 1946 he served in III (British) Corps’ Defence Company in Greece before returning to Palestine on security duties.

In 1948, he was granted a Regular Commission. On the Pirbright rifle ranges, he would stand in the pits, marking the fall of shot, and poor shooting would be received with a shout of “Scrub that one!” In other words, “Do better next time!” This earned him the nickname “Scrubber”. A series of poor shots would drive an infuriated Scrubber to the telephone to demand that the incompetent rifleman be placed under close arrest.

He served in 2nd Bn in Malaya during the early phase of the Emergency and, in 1950, his thirst for adventure led him to French Indo-China under the guise of taking a spot of leave.

He was with the 5ème Cuirassiers near Ben Cat (now in Vietnam) when Viet Minh insurgents ambushed his convoy. He helped the French silence one machine-gun but was wounded in the thigh while attacking another. He was awarded a Croix de Guerre by the C-in-C French Union Forces, General Marcel Carpentier, but questions were asked in Parliament and he was not permitted to wear the medal. In 1951 he returned to England and joined No 1 (Guards) Independent Parachute Company, which deployed for two years in Middle Eastern and North African countries, Cyprus and the Suez Canal Zone. Staff postings to 3rd Independent Infantry Brigade in Cyprus and HQ Tripolitanian Area, Libya, were followed by a spell as an instructor at the School of Infantry, Warminster. He was appointed MBE (Military) in 1964.

In October 1965 1st Bn Coldstream Guards moved to Aden on internal security duties. During his six months in the colony, Stewart-Richardson supervised the installation of an 11-mile barbed-wire fence to restrict infiltration by undesirable elements. This became known as the “Scrubber Line”. Like the Maginot Line, it had its weaknesses and, very soon, sand drifting against the fence turned into dunes, and smugglers and dissidents were able to drive over the top.

In 1967 he took command of 10th (Volunteer) Bn The Parachute Regiment (10 Para), based at White City, London. Attachment to 3 Para resulted in him becoming known to many in the Airborne Forces and he channelled his energies into ensuring that his unit could fight alongside its counterparts in the Regular Army.

After promotion to full colonel with responsibility for the training of UK Land Forces, in 1976 he was seconded to Oman, in the rank of brigadier, to command the Northern Oman Brigade of the Sultan’s armed forces.

There, arriving to inspect the armoured car regiment, he found the vehicles lined up, with camp followers and cooking pots nearby. Having peered into the turret of a Saladin armoured car, he turned to the troop commander, an officer from a fashionable cavalry regiment, and said: “There are too many flies in there.” “Oh dear, Sir,” came the reply, “how many flies should there be?”

On another occasion, he was at Gatwick airport, going on holiday, when he spotted a group of men in ill-fitting Army uniforms. Most were overweight and in need of a haircut; some were smoking; others were chewing gum. Outraged at their sloppy appearance, he marched them on to the concourse, lined them up for inspection and bawled them out.

The men were in fact professors of modern languages on their way to attend a Nato Intelligence course. Letters poured in from universities protesting at the treatment of their distinguished academics.

On leaving the Army in 1981, Stewart-Richardson set up a security company with another officer. During the Bosnian conflict of the early 1990s, at considerable personal risk, he drove a truck delivering food and medicine.

He also devoted himself to other charitable work, presiding over his branch of the Coldstream Guards Association and raising funds for the Royal British Legion and the Army Benevolent Fund. He was churchwarden at North Creake, Norfolk, and High Sheriff of Norfolk in 1989. Besides his courage and dedication to helping people, he was a kind and inspiring leader.

Peter Stewart-Richardson married, in 1954, Patricia (Tricia) Evans-Lombe, who predeceased him. He is survived by their son and two daughters. Another son was killed in a road accident in 1978.

Profile image courtesy of The Telegraph. 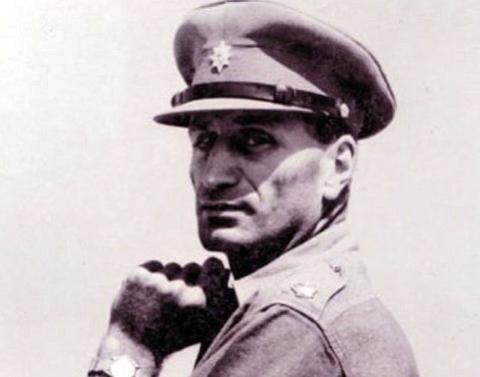