Peter Malone served with The Argyll and Sutherland Highlanders prior to volunteering for airborne forces during the Second World War.

He completed Parachute Course 43 at RAF Ringway in mid-February 1943, and served with HQ Company of 5th (Scottish) Parachute Battalion in Italy, South of France, Greece and Palestine.

After the war he served with D Coy,14th Battalion The Parachute Regiment (TA) in Portsmouth Hants.

Peter Malone then served with 2 PARA & 3 PARA and was deployed to Cyprus, Suez and Bahrain.

He was posted to Singapore for three years with his family in the mid-sixties to HQ Far East Land Forces at Phoenix Park and then posted to the Parachute Course Administration Unit at RAF Abingdon. 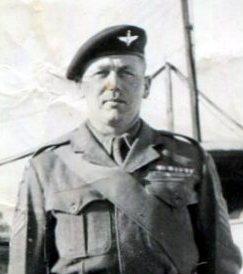