Percy Robert ‘Pip’ Tyler began his military career at the school after evacuration, as an Airforce Cadet. Leaving school he worked briefly in a bank, and joined the Signals Platoon of the St Anne's-on-Sea Company, Home Guard.

Following a year’s service, he was called up on 5 November 1942 to Gordon Barracks Aberdeen. After six weeks basic training, he was posted to the Reconnaissance Corps Training Depot in Scarborough, where he trained as a Driver/Operator and became a Lance Corporal, teaching Morse code.

In early 1943, he was posted to 1st Airlanding Reconnaissance Squadron and shortly afterwards embarked for Algeria from Liverpool aboard a converted liner The Staffordshire. On arrival, he and others from the Squadron spent time on Driver transport duties in the region, but was also drafted into some more unusual roles, acting as a guard at a Prisoner of War camp and sent to an aerodrome to help load and move American WACO ‘Hadrian’ gliders, which had initially been supplied with no crews. With trained glider pilots scarce, he even received some basic training to support a first pilot until, mercifully, reinforcements arrived and he could return to normal duties.

Rations were basic ‘C’ rations, and each group of men would have their own fire to heat water to heat the tins of food. The conditions and rudimentary equipment meant this could be hazardous:

‘On one occasion I was told to relight a fire which consisted of half a two-gallon petrol can filled with sand. Unfortunately I could not see in the bright sunlight that it was already alight, and pouring petrol onto it. [The can from which I was pouring caught fire]. As I threw it away, some of the lighted petrol spilled onto my hose top which caught fire and burned me quite badly.'

Although he was ‘rescued’ from hospital the day before he would have risked discharge from the unit, he was frustrated to miss the Sicily invasion.

Shortly afterwards however, the Squadron took part in the seaborne invasion of Taranto on the East coast of Italy, and Pip embarked with the rest of the Squadron on the USS Boise. After several months in Italy, he returned with the Squadron to the UK, and their new base in Ruskington for Christmas 1943.

In early 1944, Pip was part of the Squadron troops who retrained at RAF Ringway as Paratroopers (when the unit became known as the 1st Airborne Reconnaissance Squadron). Despite recognition of a battle-harden combat unit, the men embarked on the same thorough physical training, before progressing to static balloon jumps and exits from Whitley's and the new Dakotas.

As he neared the end of his training, on 11 April 1944 the course were to jump from Whitley bombers, using the techniques they had learned on the dummy rigs. Conditions for Pip's jump were poor:

'I had no idea anything was wrong but apparently a breeze caught me and I started swinging under the shute. As I neared the ground I thought I was coming in fast forward and prepared myself for a forward landing. Just as I reached the ground I was at the end of a forward swing and got dumped on the ground flat on my back.'

He was transferred to Chester Military Hospital with a back injury which resulted in a full torso plaster cast which he would eventually wear for most of the next ten months. His injuries ultimately ended his association with the Squadron. He was transferred to Derwen Emergency Medical Centre in late April, and stayed there 10 months until he was posted to the RAC Depot in late February 1945.

During the latter stages of his recuperation at Derwen, he assisted the medical nurses in their duties and worked as a operating theatre orderly. After transfer to the RAC Depot he eventually became a Radio Operator Instructor, but as many of his 'trainees' were returning Prisoners of War, activities were often quite light, for a number of reasons.

Pip Tyler continued in this role until May 1946, when he was sent on a temporary assignment to the 60 Special Company (VISTRE) Royal Engineers- an surprising unit working in battlefield counter-intelligence. Pip formed team of radio operators tasked with working a number of radios producing sounds of military equipment and communications to fool an observing enemy.

He returned to Depot in August 1946. He had been volunteered for the newly-reformed Army Education Corps, and was sent to their Training Depot at Tunbridge Wells in late-August 1946. Later he was sent to the London District to assist new Education Corps Sergeants. He was eventually posted to the War Office AE3 Vocational Information Section to help organise and sift candidates for vocational training courses. Eventually, his low medical rating meant he accepted demobilisation on 28 October 1948, very nearly six after he was called up.

He was hugely proud to have become a Warrant Officer, but more so to have served with 1st Airborne Reconnaissance Squadron and is now the Chairman of the Old Comrades Association. He has attended ceremonies in various locations in this capacity. Pip Tyler remains a very active member of the veterans community, has been a huge help in recording the history of the Squadron on ParaData.

With assistance from Pip Tyler

Percy Robert ‘Pip’ Tyler began his military career at the school when he was evacuated in 1940, serving in a local Airforce Cadet Unit. 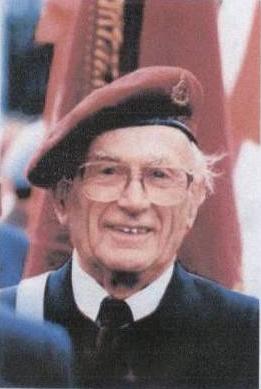 louis wright said:
Pip, you will be sadly missed, it was a pleasure to have met you in person during the 70th aniversary celebration in Oosterbeek & Arnhem. I still have video of you reciting your poem to us. My sincere condolences to all your family from all the lads in the Market Gardeners Association Living History Group. RIP Louis Wright
Add your comment