Paul Farrar was born in West Yorkshire in 1954.  After 4 years as an Army Cadet, he joined the TA in Oct 71 and did his initial parachute training with 4 PARA in Aug 73. He was commissioned on a University Cadetship at Manchester University in 1974, originally into the Prince of Wales’s Own Regiment of Yorkshire, but transferred to PARA during his final year in 1975. After Sandhurst and All Arms P Company, he completed the Platoon Commanders Battle Course before joining 1 PARA in Berlin. Thereafter he served a full career until retirement in Sep 2009. His Regular service lasted almost 36 years and he always described it as a hobby, never as a job..!

He served in all three Regular Battalions and also at Depot PARA and AB Forces. Appointments held were Rifle Pl Comd, IO, Coy 2IC, Adjt, Patrols Pl Comd, Coy Comd in both 2 and 3 PARA and 2IC of 1 PARA. As a Lt Col he commanded the Army Training Regiment (Lichfield) - which trained recruits for the Parachute Regiment, POW Division and the Army Medical Services. He was also the Team President of the Red Devils Freefall Team for 6 years.

He attended the Army Staff College, Camberley in 1986, and as a Grade 2 Staff Officer served in BAOR, before the Wall came down, and later as an SO2(W) in Special Projects in MOD Whitehall.

As a Grade 1 Staff Officer, he spent 2½ years in the Directorate of Land Warfare, the Army’s ‘Think Tank’. He moved from there to be an SO1(W) at the MOD Procurement Executive at Abbeywood, Bristol, where he was the Project Manager for Medium Range TRIGAT – a man-portable, laser-guided, anti-tank weapon intended to replace Milan. The highlight of that tour was running the 5-Nation hot weather trials in Australia for nearly 4 months, being Hot-Arid at Woomera (South Australia) and Hot-Humid at Mount Bundy in the Northern Territories.

As a full Colonel, he spent a year on Loan Service in Sierra Leone, overseeing the Military Reintegration Plan and the initial training for ex rebel fighters, into the Republic of Sierra Leone Armed Forces. He then had the dream job, for over 4 years, of setting up and being the first Commander of Adventurous Training Group (Army), responsible for adventurous training worldwide, commanding AT Centres from Canada to Cyprus and from Kiel to Kenya. For his own part he was mainly a mountaineer, skier and skydiver, although did later qualify as an Alpine Paragliding Pilot.

He also served in Afghanistan, embedded with the US Army Task Force Phoenix. He was then supposed to go directly to Baghdad to oversee the Iraqi Officer Academy, but this was cancelled and he moved to his final post as Colonel Army Recruiting at Upavon, Wilts, in Jul 07.

He served on operations in Cyprus (with the UN), Northern Ireland (6 tours, 2 in South Armagh, 4 in Belfast), the Falklands War, Sierra Leone and Afghanistan and was twice Mentioned in Despatches. First, as a Capt (Patrols Pl Comd) with 2 PARA in 1982 (Falkland Islands) and then as a Maj (B Coy Comd) with 3 PARA in 1990 (NI). He was appointed OBE in the New Year’s Honours 2002 and was awarded the US Army Meritorious Service Medal (MSM) in Afghanistan in 2007.

During his service he completed over 1,000 parachute jumps and was Military Freefall (HALO) qualified. In 1994, he jumped into both Normandy and Arnhem on the 50th Anniversary of D-Day and Op Market Garden respectively. The latter was on his 40th birthday from the lead Dakota. He was also among a privileged few in the Regiment to have parachuted onto the Mediterranean islands of Corsica, Sardinia and Crete.

He married Susan in 1981 and they have 2 sons and 1 granddaughter. Following his retirement in 2009, he indulged his passion for advanced motorcycling and became an Examiner, Masters Mentor, National Observer Assessor and Skills Day (track based) Instructor with the IAM, the UK’s largest road safety charity. He also holds the RoSPA Diploma in Advanced Riding Instruction. 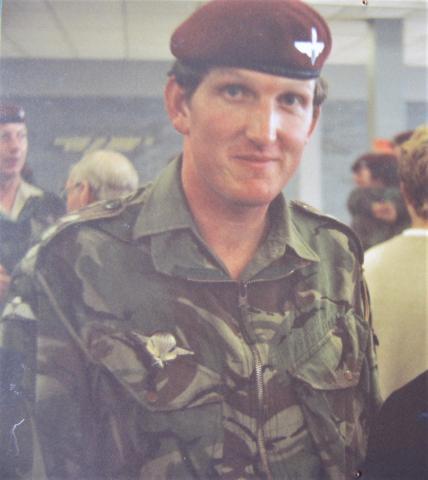