Paul 'Burdie' Burden nearly failed P Company in 1981 due to coming down with Glandular Fever. In fact, it nearly killed him, such was his commitment to go on. Back-partied, the second time he was successful, and passed out on 2 April, 1982. During his passing out parade, news broke that the Argentinians had invaded The Falkland Islands.

On arrival home he was immediately recalled to barracks, but instead of going to the South Atlantic, he joined 1 Para and was sent to Northern Ireland. He served a second subsequent tour there, as well as going to Norway and Cyprus.

After 3 years service Paul quit the Paras and travelled the world.

In November 2020, after being admitted to hospital with suspected Long Covid health issues, Paul was quickly diagnosed with terminal Lung Cancer. Two weeks later he contracted Covid whilst in hospital, and died a few days later.

A friend to everybody, Paul will be sorely missed. 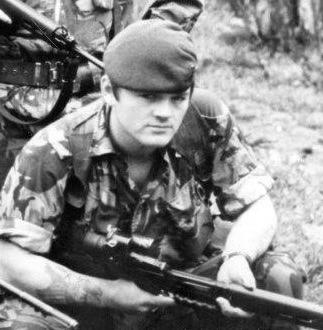