Paul Burns was born on 25 March 1961, the son of Matt and Joan Burns and grew up in Toton, a suburb of Nottingham. He was the youngest of four children. His father died in 1965 and  as a result the family had to move into a smaller house in Nottingham.

By the age of 11 years he had joined the Army Cadets and when he was 16 years old Paul joined 30 Platoon, Junior Parachute Company at Browning Barracks in Aldershot. A year later he joined 448 Platoon, Recruit Company, at Depot, The Parachute Regiment and Airborne Forces in September 1978.

After training he was posted to 2 PARA in Berlin, in January 1979, before moving with them to Northern Ireland later that year. In August, six weeks in to the tour, the vehicle in which he was travelling was blown up by a roadside bomb planted by the IRA at Warrenpoint.

Paul was one of two survivors in the vehicle; the other six crew members dying in the blast. As a result of the injuries that he received his left leg was amputated and his right leg severely damaged, but saved. After a year in hospital and a further year’s rehabilitation, Paul re–joined his battalion in 1981. He subsequently trained as a parachute rigger and joined the Red Devils, The Parachute Regiment's Freefall Display Team.

After leaving the British Army in 1991, he went on to work in the parachute industry for five years until the pain, mainly from his surviving right leg, became so severe that he was forced to retire on medical grounds. In spite of this he continued freefall parachuting, eventually notching up around 1,000 jumps. He also served as a member of the British Parachute Association's Rigger Committee until his untimely death.

Paul's disability did not deter him from an active and energetic life. He was part of the first all disabled crew to circumnavigate the world in the yacht ‘Time and Tide’, during the BT Global Challenge in 1996/97. He went on to become a fully qualified Ocean Yachtmaster and skippered a 65ft yacht in the Fastnet Race in August 2010, in charge of a British Limbless Ex–Servicemen’s Association (BLESMA) crew.

In 2010, BBC One launched the 'My Story' competition to find the most remarkable true-life stories in Britain. Shortlisted from an initial entry of over 15,000 stories, Paul was chosen as the winner and his remarkable story has now been published as a book ‘A Fighting Spirit’.

Paul also learned to ride a horse and to drive a carriage in order to take part in the challenge, ‘Horses help Heroes’. As part of a team of wounded servicemen, he drove a horse–drawn replica WW1 ambulance, 1,000 miles from Land’s End to John O’Groats, travelling non–stop, 24 hours a day over ten days.

In spite of having his second leg amputated Paul went on to perform an aerial display at the opening ceremony of the Paralympic games in 2012.

Paul spent much of his time volunteering for charity and helping injured serving personnel. He inspired countless numbers of people throughout his life and in March 2013 he was awarded the Bowman Award by the Soldiering On Trust in recognition of his efforts.

Sadly, Paul Burns died on 7 June 2013, aged 52 years, from a heart attack shortly after an accident.

An outstanding paratrooper and a true gentleman.

A tribute to Paul Burns by Horseback UK

We have very sad news. Our friend and colleague Paul Burns has died. Paul was a regular volunteer and fund-raiser for HorseBack UK, but those words are not enough to describe him. 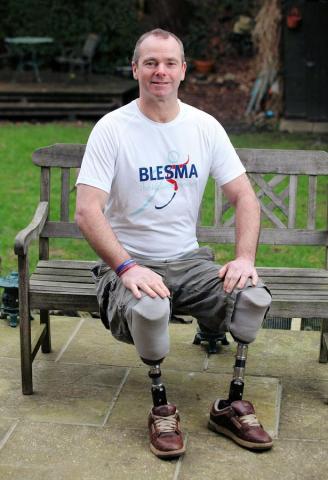 Denzil Connick said:
Paul Burns died today, 7 June. He was and will continue to be an inspiration to thousands. RIP mate, I am proud to call you a friend and Airborne Brother.
Add your comment