Paul Aller was enlisted in Chichester into the General Service Corps and posted to 45 Infantry Training Centre on 19 February 1942.

At the beginning of July 1942 he was posted to the 10th Battalion of the Somerset Light Infantry, which was transferred to airborne forces later that year and renamed 7th (Light Infantry) Parachute Battalion. Paul attended course 41 at RAF Ringway in December 1942 for parachute training along with other members of his battalion,

He was promoted to Acting Lance Corporal a couple of months prior to the Normandy landings in 1944. Although he emplaned on the night of 5 June,to parachute into action, his plane aborted its mission due to a technical error and he listened to news of the invasion on the radio the following morning while eating breakfast. Later that day he boarded a glider for his second trip across the channel and landed successfully in Normandy, where he remained until the beginning of September.

Paul went on to take part in the Ardennes operation in the winter of 1944-45 and was then injured by a sniper whilst digging a trench in the woods, during Operation Varsity, the Rhine Crossing.He returned to the UK on 21 May 1945 having been hospitalised in Bruges.

After recovering from his wounds, he was promoted to Acting Corporal in July 1945, and set sail for Singapore, via India. He was granted the War Substantive rank of Corporal shortly after arrival,and appointed Acting Sergeant in December.

In January 1946, Paul was posted from Singapore to Madras, where he was granted the rank of War Substantive Sergeant.  During this period he acted as Orderly Room Quarter Master Sergeant, remaining in Madras until October 1946 and released to the Army Reserve in January 1947.

After the war he married Joan and had two sons. He became a manager with Rentokil and retired in 1986. Paul joined The Parachute Regimental Association four years later, and in 1994 returned to Normandy for the first time for a reunion.He was made Freeman of the town of Benouville, along with other Normandy veterans, on another trip in 1996.

Paul went on to serve as Worthing Branch President from 2005 until his death and a Guard of Honour was formed by his comrades at his funeral at Worthing Crematorium on 14 June 2011.

With assistance from Mrs J Aller 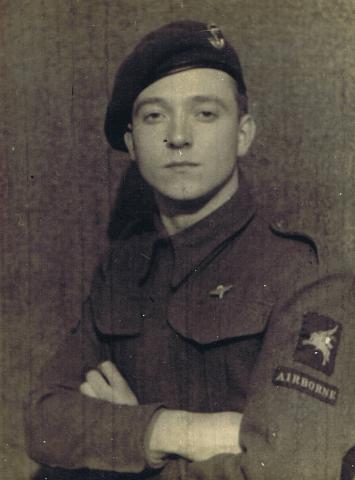