Colonel Patrick (Paddy) Rupert Richard de Burgh was born in Cheshire on 8 November 1923 and educated at the Imperial Service College.

After he left school he enlisted  as a gunner in 1941, with The Royal Artillery and was granted an emergency commission on 1 May 1943.

After various moves he joined HQ 1st Airborne Division and took part in the Battle of Arnhem during Operation Market Garden in September 1944.

During the battle, he took a wounded signaller to a medical centre. Unknown to him, the building had been overrun by the Germans and he was taken prisoner and forced to work as a medical orderly.

However, during the darkness and confusion of the night, he escaped through an open window in driving rain and eventually made his escape eventually joining remnants of the 1st Airborne Division. Paddy was subsequently awarded a Mention in Despatches for his actions.(London Gazette 10 May 1945.)

Shortly after returning to the UK Paddy attended RAF Ringway and qualified as a military parachutist on Course 151 which ran from 30 January to 16 February 1945.

He later served with the 1st Airborne Division in Norway as part of Operation Doomsday.

After the war, he served in Palestine and Singapore and ended his career as Deputy Commandant at the Royal School of Artillery, Larkhill. He retired from the regular army on 8 November 1978 and became the artillery school’s librarian.

A keen horseman, he was secretary of the Royal Artillery Hunt and he also acted as paddock steward at Larkhill point to points. He served on West Lavington Parish Council and was a governor of Dauntsey’s School. 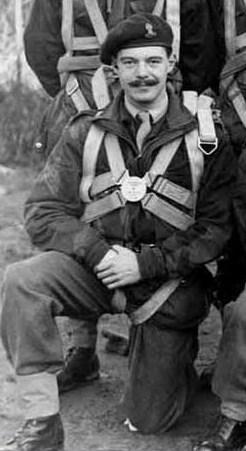