Patrick Edward Clarke was born on the 23 February 1918 and was educated at a Roman Catholic Elementary School in North-West London. He then had a scholarship to Hendon County Grammar School and obtained a London University School Certificate and took a supplementary Commercial Course. He completed his schooling in 1936.

His first employer, in 1936, was Messrs. John Barker & Co, of Kensington as a Junior Accountant, which provided him with a good commercial grounding.

Having enlisted in the Territorial Army, The London Rifle Brigade, on the 3 February 1937, he was called up in September 1939, on the declaration of war.

In 1940 he volunteered for No 5 Special Service Company and took part in the Norwegian campaign. After the end of the campaign, which did not go very well for the combined Allied Force, he returned to the Rifle Brigade in 1941. With them he was sent to the Middle East and fought throughout the Western Desert campaign as part of the 8th Army, finishing up on the Mareth Line in Tunisia 1943.

He then volunteered for airborne forces and was sent to Palestine to undertake his parachute training. Upon completion of this he was posted to the 10th Parachute Battalion and saw active service with them in Italy in September 1943, when he took part in ‘Operation Slapstick’.

The 10th Battalion then returned to the UK in December 1943 and settled in the Somerby area of Leicestershire. After training for and being stood-to for many airborne operations he finally took off from Spanhoe aerodrome on Monday, 18 September 1944 as part of ‘Operation Market Garden’. His battalion was to drop as part of the Second Lift of the 1st Airborne Division to secure a crossing of the Lower Rhine river at Arnhem. He parachuted onto DZ ‘Y’, Ginkel Heath, whilst under fire from German forces and moved to the rendezvous near the Ginkel Heath café.

Sometime in the next week of very fierce fighting he was captured and sent to a POW Camp in Germany, Stalag 12A. In January/February 1945 he was part of a forced march by the Germans from their camp in the face of the advancing Russian forces and he managed to escape from the column and link up with advancing Allied forces.

After he was returned to the UK he served in No 20 Supply Reserve Depot, Royal Army Service Corps at Purfleet near Guildford in Surrey. He was discharged from Regular Army service in January 1946, with the rank of Corporal.

After his demobilisation, he worked for a publisher’s firm, before moving to South Africa and working as a Courier and Game Ranger, before joining the Kenya Police in 1952.

Ten years later he returned to Britain to work for the Metropolitan Police and later as a Security Officer.

Patrick Clarke died at Whittington Hospital on the 26 December 2013.

By Bob Hilton and Rebecca Blackburn 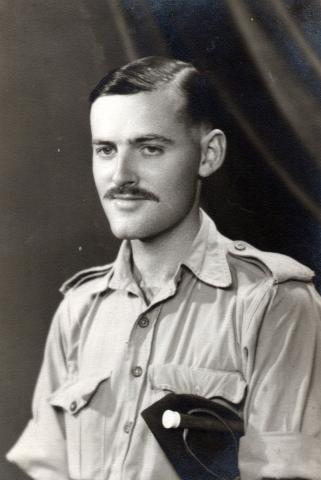