Paddy Doyle was a former 2 Para member, he was discharged from the Regiment in April 1986.

Since leaving the Parachute Regiment, Doyle turned his athletic energy into beating strength speed stamina boxing martial arts records. His first fitness endurance record was in May 1987, where he set a new World Record for the most push ups in four and half hours carrying 50lb weight on his back, completing a total of 4,100. Unknown to him and his training team he went onto achieve a career total of 191 Course, Regional, National, British, European and World Strength, Speed, Stamina, Boxing and Martial Arts Title records. To date, Paddy Doyle has had 54 entries in the 1990 - 2011 Guinness Book of World Records.

His toughest World Title (also making him the first British athlete to win the coveted title from the USA) was the Guinness World Records Fittest Athlete title. He completed the following in 18 hrs: 56 mins: 9 sec's:

Doyle's main target for 2010 to July 2011 is to beat the Ultimate World Record Title(UWRT) of 29 fitness endurance records set in a calender year, held by Paul Woodland (GBR). The new 2010 "Believe The Unbelievable" World Record Book has also entered 84 of his official World Record Titles.

For more information and statistics check out these links: 1, 2, 3, 4.

Pictured setting World Record for the most push ups in 1 minute carrying 40 lb back pack, set at Stamina's boxing self defence gym on 11 Oct 2010

Plenty of spectators turned up to see Multi Guinness World Record Holder Paddy Doyle make history at the Royal British Legion Club in Berkswell Solihull . Supported by his team of pacers and training partners Doyle attempted four tough and demanding Guinness fitness endurance Records . The first three to be ticked off was;   The most step ups on a 15 inch bench carrying 100lb back pack in one minute. Doyle completed 31 beating the previous Guinness record by 2 step ups.    Most squat jumps {jumping jacks} in one minute carrying 100lb back pack. Completed 51 beating the Guinness Record benchmark by 41.   Most military star jumps in one minute carrying 100lb back pack. Completed 25 beating the Guinness Record benchmark by 20.   Doyle and his team then got ready for the 10km cross country speed march carrying the 100lb back pack, the start line was outside the British Legion Club. 11.00am was the official start to the gruelling cross country march, he had to go over stiles, through muddy footpaths, fields and inclines. Feeling already exhausted from the previous demanding strength endurance challenges Paddy pushed himself all the way to the finish line in a time of 2 hrs. 06 mins. 59 sec's knocking 23 minutes off the Guinness Record bench mark off.   Paddy said " I was worried that my on-going injury's were going to kick in and stop me, however I knew I had to dig deep and stay focused no matter whether I collapsed or not, it has taken me 26 years to reach this historical milestone and being the first in the World is an honour, surpassing the 300 fitness endurance record target was truly unbelievable and being encouraged by the supporters helped me immensely, My team and Jim Morsley were behind me 100%. It was also great for the Lord Mayor to read out a message from Craig Glenday Guinness Records Editor congratulating me on my recent success. I will have a rest for a few weeks and relax and heal my body, and look forward to getting back into training in the near future". 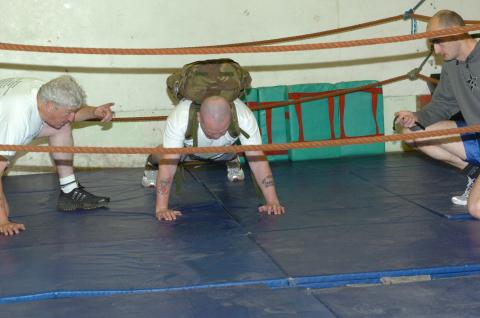