Corporal Owen Lilly originally enlisted with the King's Own Scottish Borderers. He transferred to 156th Parachute Battalion and saw service in North Africa, where he may have been wounded, as records do not confirm service with the Battalion in Italy. By late 1944, he was part of a Medium Machine Gun (MMG) Platoon when he took part in the Battle of Arnhem, during Op Market Garden.

Corporal Lilly died on 18 September 1944, aged 24 years old. He was originally buried with all other casualties from this incident near to the crashed aircraft by locals from Ochten and Eldik, then later reinterred in Jonkerbos War Cemetery near Nijmegen. Due to the fact that they could not be individually identified, the headstones bear the incription 'buried near this spot'. 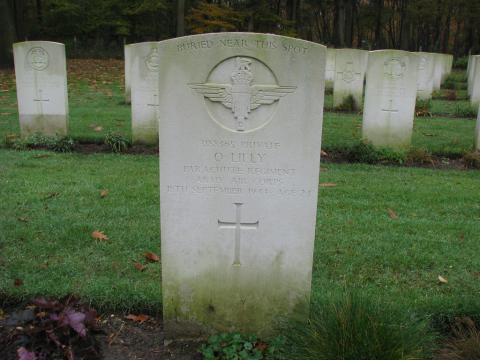