Oswald Basil ‘Mickey’ Rooney, the son of Basil Oswald Rooney and Laura Amy nee Franks, was born in Walton on the Hill, Surrey.

He was educated at Ampleforth College in Yorkshire and served in the college’s Officer Training Corps.

Rooney enlisted into the Army with his great mate Basil O’Brien in September 1939, and they were given consecutive service numbers.

He briefly served in the Scots Guards prior to transfer to 163 Officer Cadet Training Unit at Sandhurst. On completion of his officer training he was granted an emergency commission into the Royal Inniskilling Fusiliers (RIF) on 25 February 1940.

He was posted to the RIF’s Infantry Training Centre in Omagh, Northern Ireland, in April 1940.

A few months later, in August, he joined No 12 Commando in Londonderry , and became friendly with Philip Pinckney.

Both Pinckney and Rooney, along with the other members of 12 Cdo, took part in Operation Anklet, a diversionary raid on the Norwegian Lofoten islands in December 1941.

In 1942 he was attached to the Small Scale Raiding Force (SSRF), also known as 62 Commando, and is believed to have taken part in Operation Dryad, the raid on the Casquets lighthouse near Alderney.

In November 1942 he commanded Operation Fahrenheit, a raid to capture German servicemen for interrogation from the signal station at the Pointe de Plouezec on the north Brittany coast.

The following year, in September 1943, he took part in Operation Forfar Item, a parachute raid onto a searchlight emplacement at St Valery en Caux in northern France. The raiding party was extracted by MTB.

Rooney was posted to train the South Wales Borderers in the western Isles of Scotland in November 1943 shortly before 12 Cdo’s disbandment and in January 1944 was promoted to Acting Major around this time.

On 16 February 1944 he was posted to assist with training of the newly formed 3 SAS (French) until April, when he transferred to 2 SAS.

In August 1944 during Operation Rupert he commanded a team tasked with sabotaging railway lines near Metz. However on the drop his parachute got caught up in electricity lines and he badly damaged his back.

After returning to England he was sent to Italy in December 1944 to participate in Operation Galia, which tasked a detachment from 2 SAS with harassing enemy lines of communication in the area north of Spezia.Unfortunately he contracted jaundice and was withdrawn from the mission.

In March 1945 he was promoted to Temporary Major and posted on a tour of US cities to encourage Americans to buy war bonds with three SAS originals, Maj Sadler, RSM Tait, and Sgt Maj Rose.

He was demobilised to the Army reserve of officers in 1946 and granted the honorary rank of Major. 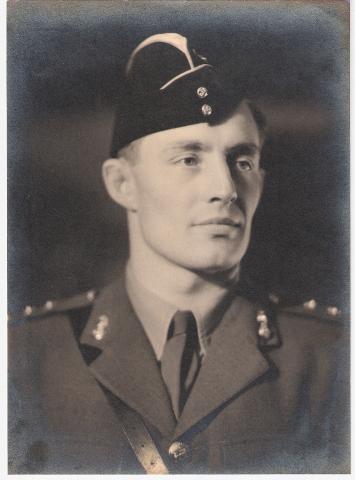